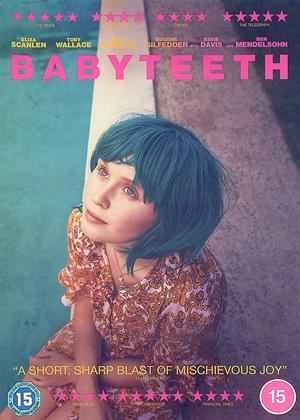 This film had such a rave review that my expectations were high but it fell short for me. There is no denying that this is a well acted and at times engaging but as a whole it didnt feel to me to tread any new grounds. Wallace and Scanlen are really engaging in the lead roles but I felt like the parents were fairly cold throughout with little personality. The ending is really moving but I guess I was just hoping for something more.

This film had such a rave review that my expectations were high but it fell short for me. There is no denying that this is a well acted and at times engaging but as a whole it didnt feel to me to tread any new grounds. Wallace and Scanlen are really engaging in the lead roles but I felt like the parents were fairly cold throughout with little personality. The ending is really moving but I guess I was just hoping for something more.

This Australian movie from debut director Shannon Murphy is as charming and life-affirming as it is sad.

The radiant Eliza Scanlen from Greta Gerwig's Little Women plays Milla, a 16 year old girl diagnosed with terminal cancer. Her psychiatrist father (Ben Mendelssohn) and pill-addicted mother (Australian institution Essie Davis) are barely able to cope at the best of times, and threaten to come further off the rails when Milla gets involved with 20 year old dropout Moses (Toby Wallace). But the family's dawning realisation about Milla's limited time left challenges their usual parenting decision-making and Milla's last weeks prove to be pretty wild and inspiring.

Babyteeth is at its best when shining a light on the tensions within love and parenting, illness and life. The direct and generous performances from the top-notch cast tease out the humanity and contradictions within these themes and their character's relationships The script is occasionally a little cheesy (the Christmas scene towards the end is a script draft on from a TV movie of the week; there's also some pretty heavy-handed metaphor about addiction throughout). But the clear-eyed direction from Murphy and the great soundtrack paper over the cracks.

Babyteeth is a fantastic showcase for a talented director and amazing cast and, what's more, a moving, sincere and warm film about a teenage cancer experience, that's arguably better than the more well known The Fault in Our Stars.

Wow. This wonderful piece by first-time feature director Shannon Murphy will speak volumes to anyone who has suffered the effects of someone taken before their time. I was very impressed by her handling of such a delicate subject and very moved.

Eliza Scanlen is pitch-perfect as the terminally ill teenager Milla, whilst Ben Mendelsohn as her father Henry and Essie Davis as mother Anna offer thoroughly convincing support as they attempt to stave off the tidal wave of grief looming over them. Murphy is really good at depicting the crushing feeling of the family home being filled with sickness, and the way any small joys managed within it are quickly stifled.

At the heart of the film is Milla’s relationship with wayward, drug-addled 23-year old Moses (admirably played by Toby Wallace), a decidedly tricky dynamic - for we are as wary of him as her parents, but ultimately we, like them, are, if not exactly won over, are forced to end up seeing him through Milla's eyes, and this is some achievement on the part of the director. Milla’s romantic and sexual awakenings are a faltering journey that Scanlen illustrates with disarming wisdom. She’s got serious chemistry with Wallace, who keenly communicates the ways that Moses’s decency is so often at war with the necessities of his addiction and the wounds of his own tumultuous family life. The age gap between the two characters, and the way it’s lovingly forgiven in the film, may rankle some, but for me it ultimately convinces. “It’s her first love,” Anna says resignedly to Henry in one quiet scene. The unspoken sentiment is that it could also very well be her last. Is that enough to excuse the gap in age and experience? Babyteeth is content live with that ambiguity, as Anna and Henry realise that giving permission to 'transgression' is in a way allowing Milla to live a whole young adulthood in a compressed, terribly fleeting time frame. Murphy is not interested in didactic lesson-learning. Instead, the film insists on the inadequacy of what is 'proper' in the face of oblivion, the confounding uselessness of saying “no” to someone who is staring down life’s ultimate negation.

Murphy avoids the clunky exposition of films of this ilk —there are few dutiful explanations of what exactly is wrong with each character. Rather, we discover their pain as the film floats along. Some omens can’t be avoided—hair loss, vomiting, dinner embarrassment after too many pills—but the film mostly knows that Milla, her family, and Moses would all understand their circumstances without needing to spell them out. And Murphy also avoids any prescriptive moralising: Henry and Anna are neither good or bad parents; they are just trying (and often failing) to find a way through an impossible situation.

My favourite (short) scene is one in which a video of fireworks exploding in slow-motion is projected on Milla’s face, all while an androgynous figure in futuristic silver circles her, and brings home Milla’s fragile being far better than any words could. Compelling viewing.

Ah if only I had known that this film was Australian before I chose it, then I would have researched it first. But no, sucked in by the cover picture, I thought that this was going to be like The Fault in Our Stars or that other film that came out at the same time as that and covered the same sort of subject, a film that I also liked, but forget what it was called. Anyway, Babyteeth is nothing like that. It is one of those films where, after a few minutes, I find myself fast-forwarding through any of the sections that involve a certain two of the characters in it, because the first scene with them in it is SO bad, so tedious, and so very Australian-filmy. And I also did not gel with either of the two main characters. If you get this film out and start watching it and find yourself thinking about fast-forwarding through bits of it, then I urge you to look out for the pregnant woman. She's very cute and also has all of the best lines, and the way she behaves is just so odd. She is by far the best character in the film, and despite predictable pretensions from the two leads, she is by far the most wayward.