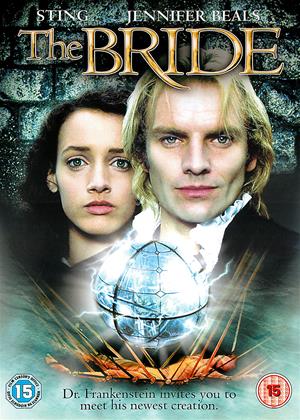 Reviews (1) of The Bride

We belong dead! - The Bride review by Count Otto Black

It must have seemed like a good idea at the time. A remake of "The Bride Of Frankenstein" from the point of view of the monsters, in which that strangely sexy she-creature who was in the original film for about two minutes before everything blew up was a major character - why not indeed? And I have to say it gets off to a cracking start, with all the usual steampunk paraphernalia going into overdrive on a dark and stormy night to bring unholy life to a shrouded something which turns out, when the bandages come off, to be Jennifer Beals from "Flashdance", complete with incredibly eighties hair! Basically, it's a Ken Russell film which for some reason they didn't invite Ken Russell to direct.

And that's where they went wrong. Ken would have kept the frantic excesses of the prologue going for the whole movie, because when you start a film with Sting from the Police reanimating Jennifer Beals from "Flashdance" in an exploding castle during a thunderstorm with the help of Quentin Crisp, you can't make it any more camp without them all breaking into a chorus of "Let's Do The Time Warp Again", so you might as well leave everything turned up to 11 until the end credits roll. Sadly, this lot don't. Jennifer Beals is very pretty, suitably baffled-looking, and completely impossible to mistake for anyone except her from "Flashdance". As for Sting, he acts about as well as you'd expect, considering that he's a grown man who calls himself Sting (it could have been worse - at least he's not Bono).

Clancy Brown is reasonably convincing as the well-meaning but mentally retarded monster who teams up with David Rappaport, by far the best actor in this mess (the inevitability of being typecast in rubbish like this because he was a dwarf finally wore him down so much that he committed suicide), but he's neither very monstrous nor remotely interesting, and you can see the way things are going to work out for those two the proverbial mile off. Jennifer Beals and Sting have about as much chemistry as two inert gases on a blind date, but it doesn't matter because their part of the plot lumbers along with almost nothing happening apart from some painfully clunky feminist propaganda from the wrong century, and a few ideas pinched from the underrated 1973 TV movie "Frankenstein: The True Story" that they don't have the slightest idea what to do with.

There are a few brief moments of gothic craziness which made me wish the whole film had been like that, but mostly it's a feeble melodrama with minimal violence and nothing you could honestly call sex, and it seems very tame compared to the Frankenstein movies Hammer made 20 or even 30 years earlier. Dull, disappointing, and despite spending almost its entire running-time trying to make you feel sorry for the monster, it succeeds far less well than either the original films with Boris Karloff, or Mel Brooks' "Young Frankenstein". Truly there are some things man is not meant to tamper with...