Rent The Chronicles of Riddick (2004) 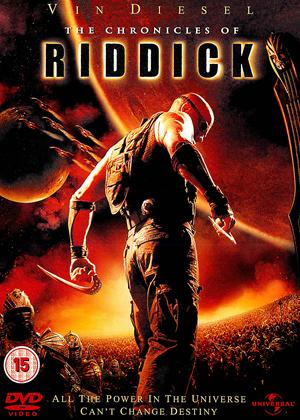 Synopsis:
Vin Diesel reprises his role as hunted fugitive Riddick, his anti-hero character from cult movie Pitch Black. Riddick is on the run. Escaping from mercenaries determined to collect the price on his head, he finds himself at the heart of a battle that is not his. With Necromonger conquerors threatening the future of the entire universe, Riddick could be the only unlikely hero to save the human race. But will he be interested in saving anything other than his own life?
Actors:
Vin Diesel, Judi Dench, Colm Feore, Thandie Newton, Karl Urban, Alexa Davalos, Linus Roache, Yorick Van Wageningen, Nick Chinlund, Keith David, Mark Gibbon, Roger R. Cross, Terry Chen, Christina Cox, Nigel Vonas, Shawn Reis, Fabian Gujral, Ty Olsson, Peter Williams, Darcy Laurie
Directors:
David Twohy
Writers:
Jim Wheat, Ken Wheat
Studio:
Universal Pictures
Genres:
Sci-Fi & Fantasy, Thrillers

Reviews (3) of The Chronicles of Riddick

Riddick breaks out! - The Chronicles of Riddick review by CP Customer

The mean, menacing 'hero' of cult classic, Pitch Black returns in the sequel to the aforementioned movie.

Yes Vin is back to doing what he does best, being quietly spoken (you will have to pump the volume for talking when he's on, then get prepared to turn it down again when the fights/battles begin!)

and kicking butt. The hero stroke/villain role suits the man perfectly, requiring not much skill to play the role. (Rumour has it he's down to play Agent 47 from the Hitman series of computer games)

But the thing that will strike you right between the eys are the drop dead georgeous visuals, from the design of the bad guys ships, right too the stunning star scapes of space. Besides that there is a plot, that maybe tries to be too clever for it's own good, with no real explanation as to who the Elementals are (played by Judi Dench, no less!) and a villainious group of bad guys from the underverse with the strange name of necrosomething or the other, that makes you feel you've walked into a film at least partially inspired by Warhammer 40,000. Still it's a brave attempt at a sequel, has plenty of action and drop dead stunning sets and visuals. I've seen better but I've also seen a whole lot worse.

Riddick, the ever unstoppable Vin Diesel ("You sent a four man team to catch ME?") gets caught up in the expansionist hijinks of an army of nazi-cum-borg types called "necromongers". Good stuff, you may think. You may expect lots of good actions sequences set in space...

Unfortunately, a lot of the action takes place in a dank prison compund with the dreaded necromongers off doing their own thing somewhere else entirely. Some of the action sequences are good, but the ones you expect the most of (the large athletic fight scenes) are confusingly fragmented and have no sound effects, which results more in feelings of bewilderment than of exhileration.

Still, a good ending and high budget effects allow this film to escape from the prison compound of drudgery onto the planet surface of mediocrity...but never up to the stars.

Like the book - The Chronicles of Riddick review by ML

Like the book but only ok as a movie. Not sure it would be understood without reading the book first.