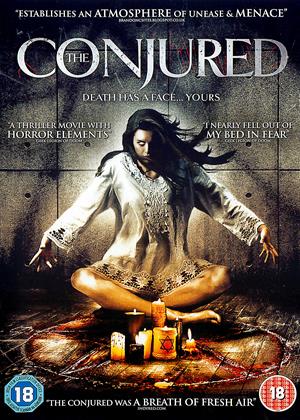 Reviews (1) of The Conjured

Originally known as ‘Adaline’, this was repackaged and retitled ‘The Conjured’. This blatant similarity to the popular ‘The Conjuring’ films gives you some idea of the originality on display here.

I wouldn’t wish to do Bidisha Chowdhury’s project a disservice; this is modestly budgeted and appears to be a labour of love, but despite the goodwill, and the cast doing their best, there isn’t anything remotely new attempted.

The film opens in a gory way, which is out of place with the more sedate nature of what is to come. When Daniela (Jill Evyn) inherits a mansion from an Aunt in the middle of nowhere and her friend exclaims, “I didn’t even know you had an Aunt,” you are sure what the next line will be (“I didn’t know I had an Aunt either,” in case you’re wondering). Nice bloke John (Lane Townsend) turns up and proves inordinately helpful one way or another. He’ll be the main villain then, will he? Well, will he? No-one smiles like that all the time.

There’s an abusive ex-boyfriend and a mentally handicapped character as further possibilities, but really, things are extremely predictable here. It won’t keep you guessing. Undemanding chills, with occasional scenes of sex and gore to keep you from picking up the crossword.