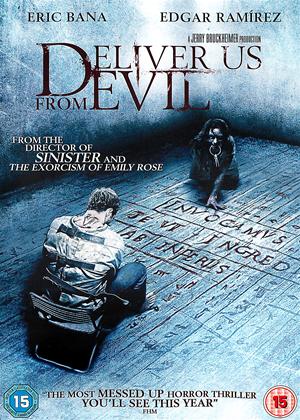 Reviews (2) of Deliver Us from Evil

good thriller - Deliver Us from Evil review by gazmb

I really enjoyed this thriller from start to finish. Good suspense and good story. A New York cop joins forces with a unconventional priest to solve supernatural crimes.

One outstanding motion picture. Compulsive viewing from start to finish. Immensely entertaining. A tour-de-force from an incredible cast. Making special mention of Lulu Wilson in a small, yet effective role.

Deliver Us from Evil review by Mark McPherson - Cinema Paradiso

In the hunt for more ghost and demon stories to push into cinemas, writer/director Scott Derrickson takes a whack at adding a police procedural into the mix. Lifting the paranormal genre from its usual stomping grounds of suburban homes and old mansions, the jump scares come to the Big Apple this time around. Aside from the change in setting, co-writer Paul Harris Boardman does little to separate this film from the current crop of boogiemen pictures. It just goes to prove that you can take a demon out of the country (or, in this case, Iraq), but you can’t take the blandness out of its spirit.

The film was based on a true story, but does as much it can to disassociate itself from reality. Eric Bana plays Sergeant Ralph, a cop that is apparently endowed with a sort of Spider-Man sensory radar that lets him know when something creepy is happening. He watches security footage of a break-in at a zoo and is the only one to see a jump scare in the footage. He has the power to experience more cliche attempts at horror than anyone else in the picture. Thus his new partner becomes a drinking priest who can help fight the evils that Ralph can detect. His current partner is Butler (Joel McHale), a smart-mouth with a knife that feels like a character from another movie.

Ralph and Joel stumble upon these ghastly possessed criminals while investigating child abuse cases. A number of them have been turning up some strange results with grizzly imagery and Latin scribbles. Ralph doesn’t believe in demon possessions, but he has no choice with his newly found powers and a priest eager to buddy up with him. He doesn’t even get into it until the sinister forces kidnap his wife and child. And he already has a flailing relationship as the husband/father who is never there so he better step up his game in this department.

For the majority of the movie, Ralph interrogates the possessed criminals that cackle and spit when asked about the whereabouts of his family. They babble on in gibberish, contort their bodies and bleed all over. This would be the moment for some twisted imagery, but it’s all fairly standard for this type of affair. Most of the time these possession tricks are rather comical for how ineffective they appear. With the bleak lighting and shattering glass from the demon screams, you feel more like you’re watching a music video than a display of horror. If things get too intense, the priest steps in to deliver his Latin safe words to force all the demons out.

New York City is on display as a depressingly bleak setting. Every scene appears bathed in garish darkness as if it’s an overly cloudy day or that a few light bulbs have burned out in the interiors. Every single room a scene takes place in feels like a rotten basement with grungy colors, dilapidated fixtures and maybe an extra smearing of grime in some spots for that extra dirty touch. What fills this ugly looking landscape lacking in lighting or color? A big bag of ineffective scares that dusts off scary toys, doors closing and the sounds of children from the old fright shelf. To be honest, the distant sounds of playing children heard in the haunted visions was actually quite pleasing. It’s refreshing to hear a little bit of happiness in a movie so putrid in style and story.

Deliver Us From Evil just can’t find its footing as it trips and sleepwalks through a paranormal crime horror. Nothing here feels like there was any originality, craft or cohesiveness for anything that is going on in this picture. When your scariest bad guy is a tall man dressed in a black hoodie with white makeup, you have a movie that’s in desperate need of some innovation. There might have been a decent idea for a horror story somewhere in this muck, but this script is buried so deep in dark confusion and cliche. Derrickson is a great director capable of some better horror films, but it just doesn’t seem like his heart was in this one.