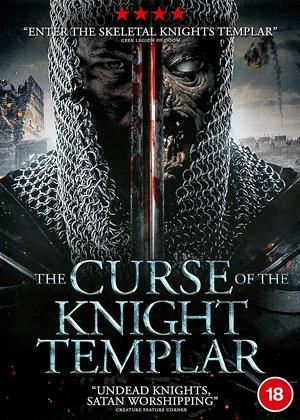 More like The Curse of the Knight of Templar

Reviews (1) of The Curse of the Knight of Templar

Loud and nasty - what's not to love? - The Curse of the Knight of Templar review by NP

In the early 1970s, Amando de Ossorio wrote and directed a series of four horror films featuring The Blind Dead. There have been a handful of loose sequels/reimaginings since then, the latest of which is 2020’s ‘Curse of the Blind Dead’ (otherwise known as ‘Curse of the Knight Templar’), helmed by director Raffaele Pocchio.

Like Ossario, Pocchio is working with a limited budget, and yet curiously, this is the stick by which many critics are hitting this imagining of the story. Other criticisms seem to be that the new skull-like wraiths bear little resemblance to the slo-mo antics of the original protagonists.

Opening with one of three fairly gruelling childbirth scenes (these Knights are concerned with taking peoples’ babies for reasons unclear), to the pleasing strains of Antón García Abril’s memorable original score. There are also scenes later on which feature the vision-impaired monsters going about their business, filmed in slow motion – so there are nods to the past without this version ever being a slave to it. A more pertinent question to be asked is – is ‘Curse of the Blind Dead’ any good?

I enjoyed it. The gut-wrenching screams from the enthusiastic cast members – understandable in the circumstances – gets a little wearing for the ears, but there’s a genuinely nasty sense of hopelessness in the story. Set for the most part after some apocalypse or other, we have a well defined future whereby for all the squabbling and friendships among the human-folk, it is the Knights Templar who are the ultimate threat. To understand that is to understand the machinations of the story, especially the final scenes. As long as these creatures are appeased, that provides the rest of dwindling humanity a respite from the brutal raw realities of their lives – and I rather like that premise.

There’s a tiny, tiny cameo from 70’s Italian star Fabio Testi (blink and you’ll miss him), and the rest of the actors do everything they can to convince us of the horror of it all. I’d quite like to see the Blind Dead come back for a few more films yet. My score is 8 gore-soaked points out of 10.