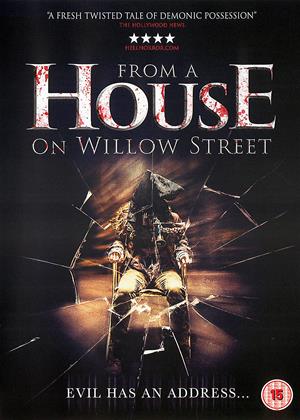 Synopsis:
When a young woman is kidnapped and held hostage, it's her unsuspecting captors who end up terrorised. Hoping to collect an impressive ransom, the desperate criminals are disappointed when their violent threats go ignored. Only upon discovery of Katherine's parents, brutally murdered in the family home, do the gang realise, too late, that their hapless victim may turn into a terrifying foe. Unfortunately, there is more to Katherine than meets the eye. An ancient evil has taken possession of her soul, and is intent on turning the table on her tormentors... with bloody results for them all.
Actors:
Sharni Vinson, Carlyn Burchell, Steven John Ward, Gustav Gerdener, Zino Ventura, Dimitri Bajlanis, Zelmia Bezuidenhout, Nicole De Klerk, Monica Ann Fourie, Ashish Gangapersad, Ter Hollmann, Gina Shmukler, Mia Slabbert, Jonathan Taylor
Directors:
Alastair Orr
Writers:
Jonathan Jordaan, Alastair Orr
Aka:
House on Willow Street
Studio:
Kaleidoscope Home Ent.
Genres:
Horror, Thrillers
Countries:
South Africa, Horror, Thrillers

Rent other films like From a House on Willow Street

Reviews (1) of From a House on Willow Street

From the basement. - From a House on Willow Street review by porky

Basic and Average Horror . Not Bad over all ,just Obvious and wasn't in any way a shock to realise what was really going on...

The Beginning is far better and gives the impression of better things coming than the ending delivers ,all of which was a bit weak ,silly and rubbish. worth watching just dont expect too much.

There’s a lot to look past to like the low-budget and simplistic terror of From a House on Willow Street. The more I thought about this movie’s premise, the more I believe it had a better life as a short film or a segment of a horror anthology. I write this only because the longer I was locked within this story of thieves and demons, the less I cared about who makes it out alive and who eats the most souls. It’s a horror movie with a lot of padding.

The characters are all of the cookie-cutter style outlaws that spend more time slinging profanity than ever coming within a mile of our sympathies. Their plan is to break into a house they’ve been stalking and hold a woman hostage for ransom. They’ve been planning this scheme out for quite some time with plenty of stalking and surveillance to get an idea of what they’re in for. What they don’t realize is that, surprise, the woman they’re kidnapping is possessed by the devil! And she’s a bit hungry for souls.

You can probably already see a problem with this type of story. It embraces the slasher aspect where we’re less concerned with who will survive and more intrigued by how these people die. The problem with this, aside from the lack of empathy we have for these bland and cocky criminals, is that in order for this type of film to work, there has to be an impressive array of frights and murders. But for dabbling in the low-budget arena of paranormal horror, you may be dismayed by what this film has to offer.

The demon that plagues the plan of these evil characters resorts to a very old bag of tricks that walk the line between simple and grotesquely bland. Her tactics for getting rid of her kidnappers is to haunt their visions with dead people, psychically attack their bodies, turn them into brainless zombies that unhinge their jaws, and use a demonic tentacle perfectly suited for vomitting out of her mouth and into the mouths of others. I’m sure it’s probably passed some quota for weird anime or James Gunn movie with the inclusion of the tentacles.

Most likely inspired by the likes of other cheep and gritty paranomal horror, the film is dirty and dark to an annoying degree. Characters will drive through dark woods, explore grimy houses, and travere enclosed areas of pipes and smoke with plenty of rust to boot. And, wow, does it get old. There’s a very tiring aspect in how the film tries to keep up this grit of characters that hate each other and spend more time talking about their heist than any interesting character aspects that don’t come off as tired cliches, topped off with dry and dull acting that never quite packs a punch with the profanity.

From the stock sound effects to the been-here-before special effects of demonic forces, From a House on Willow Street is an instantly forgettable experience, sure to be extra filler at the bottom of the bargain bin for cheaper and lesser horror movies. The only recommendation I could give this film is that it will satisfy those who still haven’t tired of watching a human being vomit out a tentacle. If that is your thing.