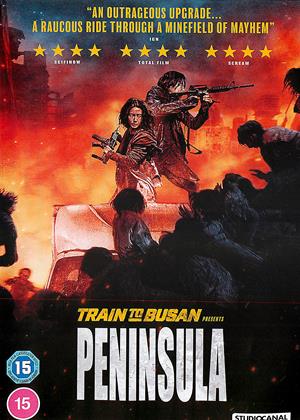 After the inventive and hugely thrilling first installment, one of the very best zombie films in the history of zombie movies, comes a related sequel. All new characters, all new storyline, this has a few fresh ideas but largely it's far from a standout. It's pretty anonymous and drowns in a CGI soup, the zombies aren't scary and the plot is a bit old hat. This reminded me of the Maze Runners sequels, too many SFX and not enough heart. Shame.

I am a great fan of Train to Busan, consequently very much looked forward to seeing Peninsula. What a let down. The story was shaky, the acting ahhh, it was ok, but when Asian cinema does "drama" it does tend to significantly over-romanticise - Chinese film especially - with soaring score and highly unlikely denouement. The CG was poor to be honest, and a significant portion of the film relies on CG generated effects, so this was detrimental. The zombies were good, but zombies alone can't carry a film, and Peninsula, in much the same way that Equalizer 2 and the subsequent John Wick movies are, is a poor pale shadow of the original concept which was highly original and supremely directed. I would buy TtB and Seoul Station, but Peninsula is utterly forgettable and will not be forming part of my collection.

Terrible CGI, awful story, woeful acting, no characters that you can relate too, plot holes aplenty. Please please please take my advice and don't waste your time with this. So disappointing after the first film.

Lacks the heart and passion of its predecessor - Train to Busan Presents: Peninsula review by LB

Following South Korean zombie movie Train to Busan was always going to be a tall order. One of the most entertaining surprises of recent years and one of the best zombie movies of all time. Peninsula sets itself in the same universe as Train to Busan, ensuring the connection is made by prefixing is with ‘Train to Busan Presents’, but attempts to go much bigger and louder, at the expense of a compelling set of characters and a strong emotional script.

After the zombie apocalypse devastated the Korean peninsula in Train to Busan, a number of survivors managed to escape by ship, arriving in Hong Kong where they set about trying to start a new life. Four years later and a news segment featuring some of the worst English speaking acting I’ve seen in a long time tells us how the peninsula became overrun with zombies and has now become completed isolated from all neighbouring countries. One of the survivors who we followed in his escape on the ship at the start of the movie is Captain Jung Seok, who agrees to return to the infected zone with a small team in order to retrieve 20 million US dollars from a truck, in return for a percentage when they get back.

Arriving in the deserted city at night (you may remember that the zombies have trouble seeing in low light), the team quickly arrive at the abandoned truck and their mission appears to be a success when they find the haul of money safely inside. However, it’s not long before there are zombies on the scene. Lots of zombies. And also some hardened survivors, who come to the aid of Jung Seok in one of many scenes which look like Mad Max: Fury Road in the dark, recreated as a video game. If you’ve ever wondered how many thousands of zombies can be run over at high-speed or slammed into during repeated handbrake turns, or while leaping off bridges, all the while sustaining very little damage to the car, then Peninsula is the movie for you.

In addition to the inconvenience of large hordes of zombies, there is now a rogue military outfit running this part of the city. This group entertains itself by watching human survivors battle it out among themselves and the undead in a Thunderdome style watery pit. It’s at this point that a whole host of uninteresting, thinly developed characters are introduced and the whole mid-section meanders along with a ‘real people are worse than zombies’ message that’s been done to death already in countless seasons of The Walking Dead. All spark of originality, tension and suspense is gone and the only thing still linking this to Train to Busan is the wonderful, jerky contortions of the zombies.

Things do eventually get back on track a little, with yet another high-energy, CGI-heavy car chase when everyone decides its time to escape the chaos once again. However, things take another downward dip when it comes to the final scene - a slo-mo attempt at an emotional ending which felt like it would never end and just came across as cheesy.

More of a spin-off than a sequel, Peninsula has some good ideas and potential. But aside from a few glimmers of brilliance, this lacks the heart and passion of its predecessor.

The stunning Train to Busan is a tough act to follow and this sequel struggles to reach the same heights. The whole Korean peninsula is now infected and our heroes must return from safety in Hong Kong to retrieve a truckload of cash. There are some apocalyptic images and plenty of frenetic action, but it doesn’t grab like the original.

There are some moronic support characters that could have strayed in from a Mad Max movie while at other times it’s more like watching an animated video game than a movie. Nevertheless it’s watchable, it has its moments and it builds to a rousing climax. Its main problem is that it isn’t Train to Busan.

Marketed in the UK as 'Train to Busan Presents: Peninsula' this is not really a sequel to the 2016 film in any real sense. None of the characters from the earlier film are present and sadly this lacks the social commentary aspects that the first film cleverly incorporated into its narrative. This latest film is an action packed zombie film that just happens to set itself in the same Korean zombie outbreak albeit four years after the events of the first film. Essentially the Korean Peninsula has been sealed off and no-one is allowed in. A Hong Kong gangster recruits four people who managed to escape at the start of the zombie apocalypse to go back in and retrieve a lorry full of cash. One of them, an ex soldier, goes as he has a guilt complex about abandoning people before but he finds survivors including a young woman and her children and a gang of rogue soldiers. This sets the story up to a great big shooting match, some fast car chases and there is a great deal of Mad Max and Escape From New York about the whole thing. But it doesn't amount to much I'm afraid, it's clichéd and a bit tired and doesn't deserve to be linked with the fantastically good first film.