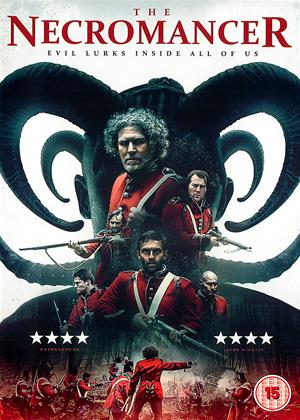 Reviews (1) of The Necromancer

Looks good but lacks bite - The Necromancer review by NP

In 2013, Film4 Productions released ‘A Field in England’, about a group of characters thrown together during the English Civil War. Filmed in black and white, it threw the men into a maelstrom of hallucinogenic horror. Perhaps it is coincidence, but there are more than a few similarities between that production and ‘The Necromancer’ – and that can be no bad thing. Whereas the 2013 release was filmed in stark black and white and directed by Ben Wheatley, this is in glorious colour and directed and written by Stuart Brennan.

‘The Necromancer’ strives to be a weird and spiritual piece, with moments of strange and demonic horror. The soldiers’ uniforms provide a splash of colour amidst the lush forests and foliage in which the group spend the majority of the 88 minute running time.

While the acting is good, and the cinematography is terrific, the film is sadly dull, spending far too long between anything particularly interesting, or much less frightening, happening. For a low budget venture, it looks great, and the sinister moments are pretty good when they come, but lack the necessary spectacle to sufficiently liven things up.