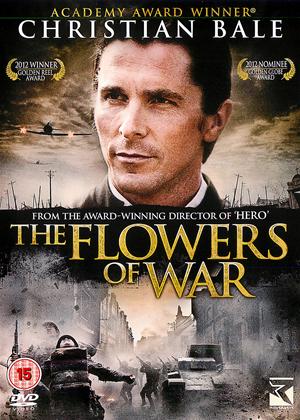 Reviews of The Flowers of War

The Chinese production of the Japanese occupation starring an American Flowers of War seems to incorporate a lot into it’s runtime; set during the notorious Rape of Nanking (1937-1938) in which Japanese troops invaded China’s major city, raping their woman and killing an estimated 300,000 civilians, Flowers of War tells the story of a small group trapped inside the supposedly neutral ground of a Catholic church.

The group hiding inside the church are no more than about thirty strong, made up of school girls and prostitutes, and would pose no threat to the hoards of well armed Japanese solders outside; yet the troops choose not to storm the church but rather wait until the group’s small supplies and patience run out.

The only hope of those trapped inside the church comes in the form of the drunken American mortician John Miller (Christian Bale) who, having missed his opportunity to flee the city safely, is sticking around still determined to be paid for his unwanted services. With the fate of these Chinese women in his hands however, he manages to sober up and devises a plan to get them out, which involves him dressing up as a priest.

Although that last bit sounds a little Carry-On, there’s no comedy about Flowers of War in fact I rather felt that it over dramatized so much that I became a little alienated from the characters and their plight. Yet for me, having previously watched City of Life and Death I found Flowers of War utterly incomparable; though the sets and staging are all done with an exquisite eye of detail, the stuck-in-the-church story simply pales a little to the representation of the real atrocities taking place outside their walls. Don’t get me wrong, the prospect of the Japanese Imperial Army camping outside your door is enough to make anyone a little nervous but I just didn’t feel that Flowers of War gave enough fear and tension to truly represent such a horrific event.

It doesn’t help that Bale is a little bit bland, although his supporting cast are excellent; yet even the presence of acclaimed newcomer Ni Ni wasn’t enough to pull Flowers of War from the realms of a poor imitation into the landscape of a heartfelt homage.