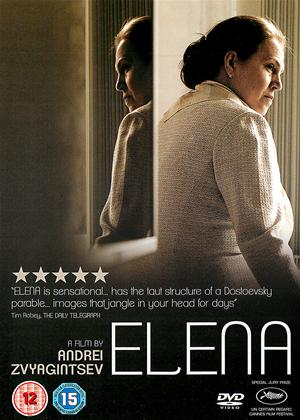 Synopsis:
Elena and Vladimir are unequal partners in their second marriage, he rich, she a former nurse. The two of them have met late in life, each with a child from a previous marriage. When Vladimir falls ill and decides to leave his money to his daughter, Elena comes up with a plan to provide her feckless son and his family with a real change in life...
Actors:
Nadezhda Markina, Andrey Smirnov, Aleksey Rozin, Elena Lyadova, Evgeniya Konushkina, Igor Ogurtsov, Igor Yurtaev
Directors:
Andrey Zvyagintsev
Producers:
Alexander Rodnyansky
Writers:
Andrey Zvyagintsev, Oleg Negin
Studio:
New Wave Films
Genres:
Drama, Thrillers
Countries:
Russia
Awards:

Elena is a difficult Russian movie that follows the moral dilemmas of Elena, an older woman not-long married to her partner of ten years with an adult son. A sudden heart attack causes her husband, Vladimir to reconcile himself with his own, distant and hedonistic, grown up daughter; which in turn leaves Elena, who has been financially supporting her unemployed son and his own young family, unable to access her husband’s wealth.

Where the story behind this movie has the potential to be very silly and Hollywood, director Andrey Zvyagintsev puts a stop to that with his use of long still shots that almost vibrate with foreboding.

In fact Elena couldn’t be further from a Hollywood movie, as it seems to spend a great deal of it’s energy highlighting the social reliance on existential morals of the self, rather than broader values of right and wrong. Elena’s decision to put her biological family first, despite the fact that they are all really just lazy and ignorant, over that of her husband and surrogate family speaks volumes for Zvyagintsev’s opinion on modern cultural values; and all of this is backed up by the strange and seemingly constant presence of a television screen, commenting perhaps on the falsely constructed image of family presented to us on TV rather than the reality of the one we truly experience.

Add a horrid level crossing accident and a scene in which Elena’s unpleasant grandson and his friends violently assault a number of homeless people for what appears to be no reason what so ever and you begin to get the impression that this is a very serious movie, with absolutely no give whatsoever.

With this in mind, the performances are all excellent and the movie isn’t too surreal or unusual for you to follow, but emotionally this is not an easy film to watch, whilst the ending doesn’t give a great deal of personal satisfaction or resolution. This is a movie that will interest many people, there are few however, I believe, who will enjoy it.