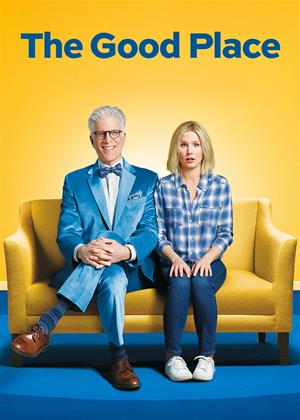 Reviews of The Good Place

The very concept and structure of The Good Place brimming with ideas, character, intelligence, and wonder that I’m amazed such a show ever made it to network television, let alone survived for more than one season. It doesn’t merely become a showy comedy existing in the afterlife but has an almost maddeningly thorough thought behind its odd and twisty story where the gears rarely grind slow.

The premise is a unique one. Eleanor Shellstrop (Kristen Bell) has died and awakens in an office. A well-dressed man by the name of Martin (Ted Danson) sits her down and tells her that she’s in the good place to go when you die. Because of her good deeds on Earth, she has been granted a chance to live in absolute paradise, where frozen yogurt is everywhere, nobody has to work, and flying is a recreational activity. There’s only one problem: Eleanor didn’t do any good deeds on Earth. She figures as much when Martin starts mentioning her acts of charity which she knew she hadn’t done, favoring a life of the undependable drunk with selfish desires.

She reveals this secret to Chidi (William Jackson Harper), her designated soul mate in this paradise. They aim to keep it a secret, but it seems that Eleanor’s lies are tearing the paradise apart. But she’s in luck as Chidi just happens to be an ethics professor and could maybe coach her into becoming a person more worthy of the good place, one who wouldn’t constantly be getting drunk and insulting others. But it won’t be easy for someone as stubborn as Eleanor or neurotic as Chidi.

To reveal anymore of the plot would be criminal as the story contorts and twists with so many surprises in the fluctuating and weird rules of the good place, the bad place and all other places in between. Other characters involved in this strangely compelling story is the prim and proper Jameela Jamil, the silent monk Jianyu (Manny Jacinto), and the android style assistant of the good place Janet (D'Arcy Carden). Everyone is holding in some secret that slowly reveal as more revelations bubble and spill out into their environment.

The fast and loose logic of The Good Place is more than forgivable because of the philosophies it proposes not so much about the afterlife but the human condition. Chidi’s lessons start to grow to complicate and conflict with the logic of how to function in the post-death world, where ethics play a massive role in writing and rewriting rules about finding that last stepping stone to goodness. These more intriguing aspects come across easier when a story such as this uses labels of the good place and bad place as opposed to heaven and hell. Angels don’t come with wings but perky smiles and devils come sharply dressed, albeit later revealed that lava monsters exist in this world; they just wear human skin to look believable to human souls and keep the budget down.

There’s limitless potential a show like The Good Place and it looks as though creator Michael Schur has mined much of its golden content. Few episodes ever seem as though they settle into a simple groove, always pushing the serialization hard in its attempt to push the human spirit to find the road to being a better person. There are smart discussions of what it means to be good and how to define oneself in a much different dimension. All of this and you get to see Ten Danson dancing.