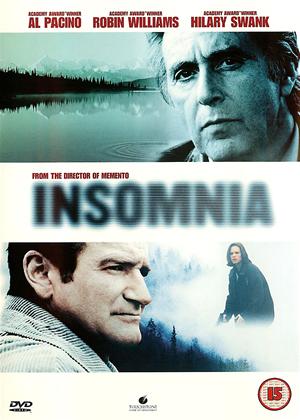 I am not a Hollywood fan and watch more sub-titled film than English, but Al Pacinos acting of a tired and stressed detective was superlative. I had seen the Norwegian original (produced 1997) without knowing there had been a remake and found it to be a good plot but rather under-acted. It felt like a fairly average TV detective series. This remake is proper cinema. This is no TV dinner fodder. If you don't feel sick with a feeling of sleep-deprivation by the end, you have no soul.

I was looking for films directed by Christopher Nolan ('Memento', 'The Prestige', 'Inception', the 'Dark Knight' Batman trilogy, 'Man of Steel' etc) when I found this excellent 2002 film. It's a remake of a 1997 Norwegian film of the same name and transplants the action to summertime Alaska, where it's daylight for 24 hours and the lead character gets no sleep for several days - hence the title.

Al Pacino and Robin Williams usually play loud, fast talking characters - but here they are much more restrained, and all the better for it. Hilary Swank has a role as a keen rookie cop (but is somewhat weak) and there's also a small part for Katherine Isabelle (she of 'Ginger Snaps' and the more recent 'American Mary' fame).

The story goes something like this: LA detective (Pacino) + partner arrive in small Alaskan town to investigate the killing of a teenage girl, while back in LA he's being investigated by Internal Affairs. In the fog and suffering from sleep deprivation he accidentally shoots his partner - but then makes the serious mistake of trying to cover it up. His lies catch up with him as it turns out the baddy (Williams, cast against type) has seen the shooting, blackmails him, and frames the boyfriend of the dead girl. However, rookie cop (Swank) figures things out and confronts baddy, leading to a final slightly disappointing Hollywood style shoot-out.

The acting is uniformly excellent, the script is good, the locations (I think it was filmed in Canada) and the photography are great, and Pacino is well cast as his craggy face and baggy eyes (sorry Al!) do indeed give the impression of severe loss of sleep. And Christopher Nolan directs with the skill we have come to expect.