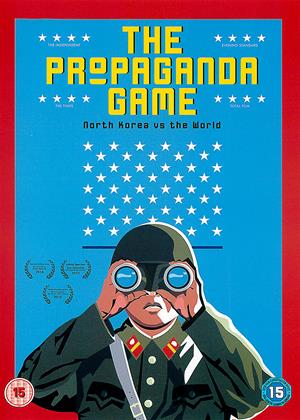 Synopsis:
Granted controlled access, filmmaker Alvaro Longoria tours North Korea to contrast his findings to the typical western depiction of the nation. With privileged but controlled access thanks to Aleoandro Cao de Benos, the only foreign national who works for the communist government, "The Propaganda Game" analyses the interests of the different players and the strategies they use to manipulate the truth. False news, half-truths and surreal controversies will lead the viewers to reach their own conclusions and reflect on how difficult it is to discern the truth.
Actors:
Aleoandro Cao de Benos
Directors:
Álvaro Longoria
Producers:
Álvaro Longoria
Writers:
Álvaro Longoria
Aka:
The Korean Dream
Studio:
Metrodome
Genres:
Documentary, Special Interest
Countries:
Spain, Documentary, Special Interest

Reviews (1) of The Propaganda Game

This is another of those films with a high concept that reviewers fall over themselves to like because it's politically correct, even if the film itself isn't really all that good. A Spanish film-maker is granted "unprecedented" access to North Korea, so long as he is accompanied at all times by government minders. Gee, I wonder if he's going to somehow burrow under the skin of the regime and uncover the whole truth, despite being constantly watched by the secret police? Spoiler: he doesn't.

The most surprising thing about this movie is how nice the majority of ordinary North Koreans obviously are. But this shouldn't really surprise anybody intelligent enough not to assume that everything said about a repressive government also applies to the normal human beings they happen to rule. And it's not really all that interesting. There is a very interesting moment involving a Catholic church that threatens to reveal something profound. But it's a mere moment, and it comes over three-quarters of the way through the movie. Almost nothing we couldn't gather from pre-existing sources is presented to us, other than the sense of a failed state like North Korea having many millions of citizens who, being ordinary people with no other information about the world than what the state tells them, assume they're living normal lives and just get on with them.

An exceptionally annoying aspect of this documentary is that just about everybody is subtitled, whether they're speaking Korean or almost perfect English with any accent other than American. This includes the Spanish director, whose English is very good, and who supplies a great deal of the narration. So we're constantly forced to switch between trying to ignore intrusive text we don't need that appears annoyingly at the bottom of the screen, and suddenly paying attention to it after all because we genuinely don't understand the language being spoken. It would be a minor detail if you could turn it off when you didn't need it, but, alas, you can't.

Another unfortunate thing about the film is that a massive amount of the North Korean government's official position is spouted by literally the only foreigner they could recruit to their cause, a dim-witted and extremely boring fanatic who happens to be Spanish, just like the director they approved for this project. Not one single word is said about the possibility that some kind of mind-game might be going on here. Or indeed the fact that North Korea's pet foreigner, despite his constant rhetoric about Socialist equality, is as chubby as Dear Leader Kim Jong-Un, in stark contrast to the conspicuously skinny general public.

My impression of this documentary was of a rather stupid man trying to be fair, and being shamelessly manipulated by people much smarter than him. It's the nearest thing the current North Korean government could hope to get to a fairly plausible whitewash. It's trying to make a very good point, but it makes it very badly. I have serious reservations about Michael Moore, but a far more interesting film would have resulted if they'd let him into the country. But then, they wouldn't, would they?