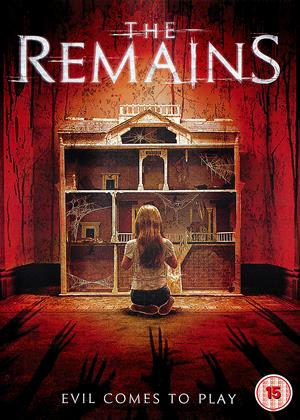 Reviews (2) of The Remains

Remains to be seen if its worth seeing ..... - The Remains review by porky

Rather an Average Haunted House movie. Not too bad but Not great either . Its one of those Films where everything would have been absolutely FINE if only the protagonist had done what they were told to do right from the beginning...BURN IT !

But of course, in the usual Horror Movie Genre way they Ignore everything they are told right from the off until its too late,

Please Note ; If you are ever offered a HUGE Old House at a knock Down Price ...There is something Wrong with it OK?

....so why wait till everyone is dying before you bother to find out what ?....DOH!

Dad, two bratty kids and sassy teen daughter we’re encouraged to fancy (determinedly unimpressed, wielded to her headphones and manicured perfectly to look like a goth call girl), move into a new house. The house has a past, of course, and spooky things happen. We’ve seen it many times before.

Having said that – other than the *vile* kids, for whom every precocious act is dismissed with an excuse – this solid story is well done. The creepy incidents are regular and well handled and the look of the house, both inside and out, is agreeably sinister.

The problem is, Dad John’s three offspring are so much more repellent than any horrors the story offers, that it really harms the film – or at least, my experience watching it. Todd Lowe plays the hapless John well, but he earns his money on this project.

Of course, you’d move out as soon as things started happening, wouldn’t you? That is a common challenge with these kind of films – the balance is in making the characters need to stay at the residence worth putting up with unwelcome supernatural activity. Whether ‘The Remains’ succeeds in that department is up to the individual. My score is 6 out of 10.

The Remains is a psychological horror flick directed and penned by the same guy, i.e.Thomas Della Bella, starring Todd Lowe, Brooke Butler, Hannah Nordberg, and Dash Williams among other actors. If someone would’ve asked me 10 years ago about the critical en passé pertaining to this piece, I would probably said that it is as watchable as two smelly pigeons making it happen on the rooftop of a 50 year-old shanty shack in rural China. However, the passing of years makes one wiser, so if you’d asked me today about the opinion regarding The Remains, I’d say: Nah.

This film plays its cards safe: it’s a horror flick featuring a standard haunted house that lit as a Catholic Christmas tree during an Orthodox graduation party. See, often the done-to-death genre of horror films fall victim to poorly lit set pieces that only end up obfuscating the main story if anything else. The Remains suffers from showing the audiences everything there is to be seen, thus falling into a trap on the opposite side of the spectrum – failing to build mystery as it goes. Which is strange to say the least, since the film features a decent effort in regards to the cinematography from people who clearly know their craft, and now it well.

The actors all do their parts well, with the exception of Hannah Nordberg who knocks this one right out of the park – and then some. But The Remains falters midway as cracks in the screenplay begin to surface. For instance, some of the most important scenes ended up being underwhelming, while the mundane ones were overplayed to a general dismay of the audience. Plus, some spots were given the extra layer of dialogue, which didn’t do much as far as story and narrative progression goes. Finally, some of the characters were showcased as different threads of already existing characters, so they could’ve mashed them together without losing any momentum or suspense – to a lack of a better word.

There are some positives though: the music feels OK-ish, although sometimes it felt like it was too loud at certain points or too soft at others (and laid too thick across the entire feature). Apart from that, there isn’t much else to say about The Remains; and this may be due to the fact that it’s Thomas Della Bella’s first film feature, hopefully in many more to come.

The final verdict would be to see The Remains, muster a laugh or two from it, and forget that it ever existed in the first place. The alternative would be to never ever see The Remains for the remainder of your life, which is just as good. Anyway, it’s up to you.