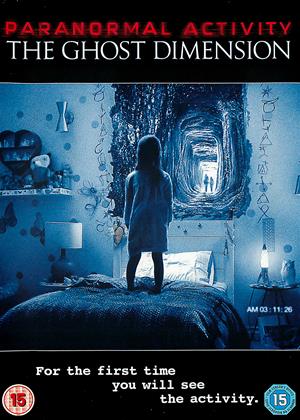 From the very beginning they were working everything out way to easily, This film didn't really give any scares or thrills for me . It's watchable but really more of the same stuff.

Paranormal Activity: The Ghost Dimension is neither scary, nor possesses the dread from the original that made the whole franchise possible (including the current entry), but is entertaining in its own silly kind of way that yields more unintentional comedy than deliberate horror.

In Paranormal Activity: The Ghost Dimension, we’re starting in medias res as we’re thrown into a house which is occupied by a family of three – the stereotypical horror characters of the little daughter, the uncertain father and the fragile mother. Two more enter the scene (the brother and the lady) and now we have a sum total of five characters – all destined to experience a tragic fate when everything ghastly wraps up to a conclusion. Needless to say: all characters are stupid, but in a fun kind of way that artificially elongates the whole ordeal to last more than what’s usually needed in those exact circumstances. Few changes are brought to the table and instead of imagining demons and similar forms of the supernatural mentally, the audience is presented instead with a CGI blob which only serves its 3D purpose and nothing more. Also, while we’re at it: can we all agree that the convention of the lazy, metonymic jump-scare should be peacefully put to sleep?

The story continues as few mysteries take hold, and this is unarguably the movie’s strongest point. Invoking (metaphorically and otherwise) events from dreary times of witches and the like, the father and his brother (Ryan and Mike played by Chris J. Murray and Dan Gill) watch tapes of some kind of strange summoning rites, while director Gregory Plotkin shows the audience several frames within frames, a total of three to be precise: the tape Ryan and Mike are watching, the ‘magical’ camera that’s able to capture apparitions filming the two of them and: us. That is correct – the last frame is reserved for the audience of the movie (showcase of Plotkin’s talents if anything). To add: the stupidity of characters is often times more than not – funny as hell.

The story (I personally wouldn’t call it a narrative) straps too many coincidences together and blows the nice build up from the beginning with a Feng shui enthusiast (Olivia Taylor Dudley) trying to explain the ghost. From here onward it all becomes too familiar for one to actually care what happens in the next scene. Still shots that’re supposed to send chills down the spine transform into boring, steady shots of nothing happening. The added static, filters and whatnot that somehow should signal the closeness of the apparition become mere obstructions in trying to watch and enjoy a movie. It is just too much potential wasted in several jump scares, albeit with a nice self-referential touch that, again, showcases what director Gregory Plotkin should’ve instead focused more onto.

As it currently stands, Paranormal Activity: The Ghost Dimension is reminiscing a very well-made YouTube video that deserves a shot at becoming a full length theater feature. Wait…