Rent The Rise and Rise of Michael Rimmer (1970) 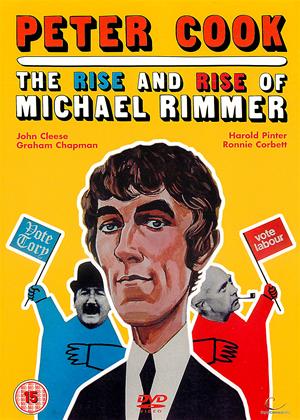 Rent other films like The Rise and Rise of Michael Rimmer

Reviews (2) of The Rise and Rise of Michael Rimmer

And you thought Tony Blair was untrustworthy... - The Rise and Rise of Michael Rimmer review by Count Otto Black

I'm not sure this film is even worth two stars, but since that's the only score between "pretty good" and "utterly putrid" this site's clumsy rating system will allow me to give it, two stars it is, though one and a half is what it really deserves.

The biggest problem is Peter Cook, who at the time was predicted to have a glittering Hollywood career ahead of him. Show-biz gossip columns called him the new Cary Grant. And then he made this film, and it became horribly apparent that he couldn't act. His performance is so flat that it's less a performance than a Peter-Cook-shaped hole in the movie. There's one moment when he expresses the kind of sinister intensity that would have brought the film to life, but it's literally the last shot in the film, which is a bit late to suddenly start acting. Otherwise he only displays slight flickers of interest when he's romancing Vanessa Howard.

Poor Vanessa Howard. After a few bit-parts in Hammer horrors, her big break was supposed to be this film, followed by top billing in the barking mad "Mumsy, Nanny, Sonny and Girly", but they both flopped dismally for reasons that weren't her fault, and that was pretty much it as far as acting went for a lady who should have been a star, but undeservedly sank into such obscurity that this site's general info page thinks her name is Vanessa Leon.

She's not the only actor short-changed by this movie. John Cleese plays a desperately eager-to-please advertising executive whose real passion is ballroom dancing, a charmingly odd character who soon vanishes in favour of crudely caricatured politicians and other nasty establishment stereotypes. Arthur Lowe is a lecherous buffoon who gets sidelined the moment the focus shifts from the early scenes set in an advertising agency to politics. And Graham Chapman just stands around smoking a pipe as if he can't think what to do with himself in this scene even though he wrote it.

Which isn't all that surprising, given that the script is as sub-Pythonesque as you'd expect from a couple of pre-Pythons who were still trying to invent the brand and didn't have two-thirds of the team on board yet. The only real laugh-out-loud moment is a ludicrously oversexed advert for peppermints which has very little to do with anything, and is probably funnier if you're old enough to remember those bizarrely sensual Cadbury's Flake ads ("Only the crumbliest flakiest chocolate..."). It's the kind of film in which a character called Peter Niss (get it?) is referred to by his full name disproportionately often because that's the best verbal gag they could come up with so they have to make the most of it.

But what really kills it stone dead is its cardboard anti-hero. If the plot had been similar to "Being There", with everyone somehow mistaking a nonentity for a charismatic visionary, it might have worked, but the writers obviously thought Peter Cook would be able to display devilishly irresistible charisma on screen, and the fact that he can't leaves everybody else behaving as if he has qualities he doesn't for no reason at all. I was reminded of those behind-the-scenes clips where the CGI character hasn't been inserted yet, so the live actors have to pretend to be tremendously impressed by a lump of polystyrene on a stick. The only movie Peter Cook starred in after this was the Paul Morrissey version of "The Hound of the Baskervilles", of which the less said the better. Dudley Moore did all right though. He's not in this movie. Perhaps that helped.

A political satire of great insight and humour. So closely resembles the modern relationship between PR men and politicians to be creepy. If you like Monty Python this is not to be missed.