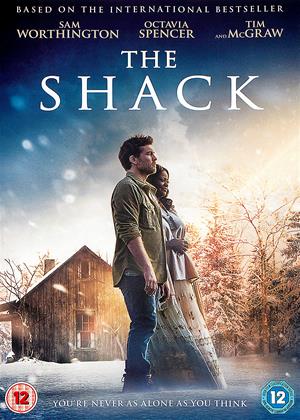 Reviews (7) of The Shack

Worth a watch - The Shack review by Ls

Firstly. I am not a 'believer' but every once in a while a film will come along that makes you stop and think. This is a beautifully constructed and beautiful movie, extremely sad concept but up lifting with it. This very much reminds me Of What Dreams May Come, which is strangely a confort to anyone who has lost a loved one. It will make you cry and i balled at if bid if will leave you uplifted.

The most sanctimoniously, patronising sack of passive aggressive rubbish I have ever had the misfortune to sit through. Toecurlingly immature script and thoroughly amateur performances. Just about every cliché in the book, The worst film I have seen since The Mist - and that was appalling. Approach with caution.....

An unashamedly Christian film - The Shack review by PT

I thought this film was profound and deeply moving. I have Christian faith, so it really hit all the right spots for me.

The heartbroken father, namely Mack, was really well played by Sam Worthington. He feels so depressed, guilty and heartbroken after the tragic loss of his daughter that he can see no light at the end of the tunnel. A miraculous invitation from God arrives, to spend the weekend with him. Could this offer the peace he yearns for?

awful - The Shack review by MM

absolutely embarrassing patronising christian drivel. avoid at all costs. how did this cast get involved with this claptrap??

Dismal. - The Shack review by AD

Over-saccharined Christian drivel. Should have been animated and aimed at the 4 year olds whose parents want them to go to church. I have sat through some really difficult films in my time but this defeated me.

Do yourself a favour. AVOID.

Drivel - The Shack review by AL

Without doubt the worst film I have ever seen. I wouldn’t have gone anywhere near it had I known it was about god.

Rubbish! - The Shack review by GG

There’s two hours of my life I won’t get back! I’m not even sure how this film got on my list, it was very poor, overlong with padded out dialogue!

Christian dramas usually come with a clunky and closed assessment of the world, where the philosophies of the white suburbanite don’t exactly serve for every scenario. The religious teachings begin to fade away into somber cliches of feel-good movies that pat the Christian community on the back. But The Shack is a very special kind of awful that comes off so muddled, meandering, and misguided. Namely, it tries to shirk the desire for revenge on a child murderer by turning the other cheek with the most ill-defined presentations of teaching such a lesson.

Sam Worthington plays Mack, a father of three. A camping trip goes awry when a boating incident forces Mack to jump into the water and save two of his kids. While doing so, his youngest daughter is kidnapped and Mack is too late to save her. Her dress is found days later in a filthy shack. It’s shocking and heartbreaking, pushing Mack into a pit of depression. Desiring closure or some sort of revenge, he returns to the shack in the cold winter and tries to come to terms with himself not being there and the choices he has made with his sordid childhood. So far so good, at least for a somber drama of guilt and death.

Now watch the film completely nosedive when Mack is overcome with a spiritual experience to instill Christian values. Gone is the snowy shack, replaced by a beautiful Southern field. Mack then meets God in the form of his childhood maid played by Octavia Spencer. Or at least she appears to be God from the spiritual aspect as Mack soon meets other spirits that guide him on a journey to acceptance. Aviv Alush seems to confirm that he is indeed Jesus, in the expected display of walking on water, a demonstration he provides while Mack remembers his kids drowning and deciding whether he should’ve abandoned them for his daughter. And then there’s Graham Greene as the wise old man who ultimately leads Mack to the corpse of his daughter.

And yet the spirits continue to push the narrative that Mack’s quest for revenge is ill-thought but with the worst approach possible. Mack is presented with several instances of questioning God’s decision to take his little girl and why such an evil man would do such a thing. While the intention of letting go of your rage and frustration is a noble trait to push, the insistence that it is not our place to judge a man that has done harm comes off more apologetic than sympathetic. Mack is given the option to send his daughter’s murderer to hell but the spirits continually ask “are you sure?” and keep mentioning “you really don’t have the right.”

I’ll spare the soapboxing of how the film tries too hard to make a point that finding this man and bringing him to justice won’t bring peace, neglecting that he may kill again if not tried in court. What I cannot forgive is how melodramatic the film approaches this subject matter with dopey theatrics of open fields, lakes for walking on water, and a grand view of the cosmos. Mack’s daughter is eventually found in the afterlife and he gets to give her a proper burial with a white cloth amid an open room that seems far more suited for some catalog of light home interiors.

Rarely do I complain about running times but at over two hours, The Shack continues to ramble and run its mouth with philosophies in a manner most ridiculous. The whole experience comes off as a slapped together story, as if a student were assigned the essay topic of defending a child killer using only Christian rules of judgment. And for being so unrelenting in its oneness of the universe approach to matters of murder and guilt, I have no doubt plenty of Christians will denounce the picture’s philosophy to carry on and not be too hard on those who have committed such sins. The real sin is making a father realize he should let the murderer be judged more by God than court of man while staring at the stars. That’s some mighty fine hypnotism there.