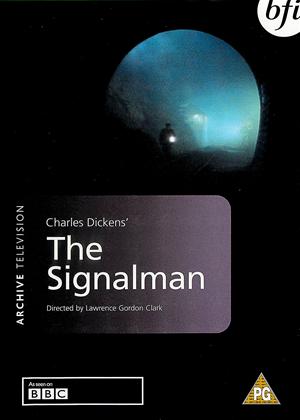 Reviews (1) of The Signalman

Eerie, but confusing - The Signalman review by Mehitabel

I had to watch this on Christmas Eve, because the Charles Dickens original my favourite ghost story. Firstly, this is an old film now, and it shows its age in the grainy quality (which is actually no bad thing) and fuzzy sound.

The surprises ("shocks" isn't the right word - too modern - although one of them did make my companion, who didn't know the story, jump!) are effective. I liked the eerie recurring effect, which turns really frightening towards the end.

You could quibble that it's rather baffling what a well-dressed Victorian city gent is doing wandering around an isolated area in completely unsuitable shoes, but that would be pointless. One result of the way the tale is told is that the narrator/traveller (Bernard Lloyd) becomes as intriguing as The Signalman himself, which is a bit of a distraction.

But my main quibble -- and it's hard to explain without spoilers -- is that at the end, you aren't quite sure exactly what has happened. I remember from reading the original story that there's no doubt at all, so it was frustrating and disappointing having to try to explain to my companion just what had been going on..

But I'd definitely say, if in doubt, do watch this little film. I say "little" because it's VERY short - no longer than an episode of a TV series. And just lose yourself in the poor Signalman's eerie plight...