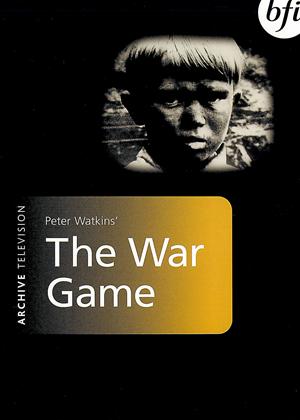 Synopsis:
Few films have caused such controversy as Peter Watkins' The War Game, a drama documentary made for BBC TV in 1965 about a "limited" nuclear attack on Kent, England. Blending fiction and fact to create a moving and startling vision of the personal as well as the public consequences of such an attack, Watkins exposes the inadequacy of the nation's Civil Defence programme and questions the philosophy of the nuclear deterrent. Conspicuously absent from TV screens until 1985, it was mainly through cinema release in 1966 - and its Academy Award for Best Documentary Feature in 1967 - that it gained a loyal and vociferous following, providing a sharp focus for CND and other peace movements.
Actors:
Michael Aspel, Peter Graham, Kathy Staff, Peter Watkins
Directors:
Peter Watkins
Writers:
Peter Watkins
Studio:
BFI Video
Genres:
British Films, Action & Adventure, Documentary, Drama
Countries:
UK
Awards:

Reviews (2) of The War Game

I saw this at a film club way back in, I think, 1968. Made in 1965 by the BBC as a TV drama is was considered too alarming and didn't get a full TV showing in the UK until 1985. Although it's a drama it is told in a documentary style and bizarrely was nominated for and won the 1967 Oscar for Best Documentary...

Looking at it today several things about it are striking, ranging from the ignorance of the general population of the effects of a nuclear blast, through the naivety of so-called 'Civil Defence' publications that advocated building a fallout shelter in the garden, to the assumption on the behalf of government that a nuclear war was not only inevitable - but survivable.

Since 'The War Game' there have been many post-apocalyptic, post-nuclear drama films made, perhaps to the point where they are commonplace. But the black-and-white photography and the very naivety demonstrated in the film make for a supremely chilling message.

It is a film very much of its time - but everyone should see this. 5/5 stars.

Time may have taken the edge from The War Game but it remains disturbing nonetheless. Much like the later TV drama Threads, The War Game takes an uncompromising look at nuclear war. Still very relevant today when, by and large, political leaders remain quiet about the earth shattering, humanity-ending result of these horrific weapons.