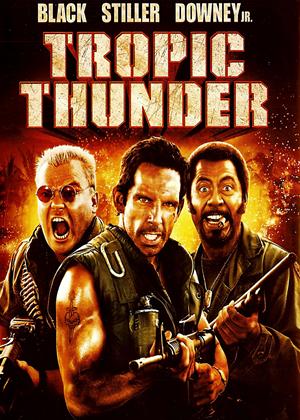 A cast of big hitters where the initial premise is let down by the final execution and a script that tries to do too much. The main actors all seem to be jostling for attention and the best lines or moments here.

Jack Black is Jack Black, if you like him then he'll provide a few laughs. Stiller is somewhat disappointing, despite the promising pre-film trailer - now that's a film I'd like to see! When the laughs are failing then expect a few explosions, gunfire and loud music to cover the cracks.

Tom Cruise is excellent in his role as a creepy ego-mad tycoon. Robert Downey Jnr is simply fantastic with his Aussie method actor who will stop at nothing in his quest for perfection. Even he cannot save a film that over-complicates its initial promise.

I saw the one funny, no amusing, moment in this film when I saw the trailer for it. I wish I could get a career like these Holllywood actors who get huge amounts of money for churning out films of less than average entertainment value. They get away with it because a) the films are wrapped up as big production numbers b) we hope the next one will be funny.

A friday night movie but only after a lot of beer!

Really was expecting more from this film. The potential was there! And thats what makes it so disappointing - a missed opportunity from what was a potentially great cast. This film should have been a winner, it was crying out for a lets take the .... out of the vietnam / yank debacle and the limited yank portrail in its globalised market. With forgiving Cruise his cult status !) and perhaps remembering he has his own axe to grind on the Hollywood producers and studios - he did a good job. What of the others, what indeed!

this film was awefull, both my wife and i agreed there was not one funny moment in the whole film