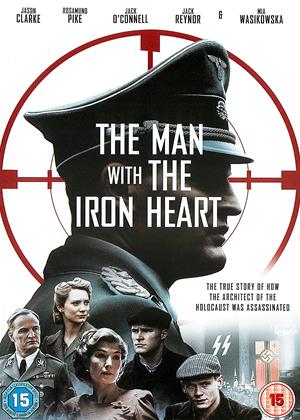 Rent other films like The Man with the Iron Heart

Reviews (2) of The Man with the Iron Heart

Bit of a mixed bag really. Some authentic looking scenes and some explicit action but it lacked fluency and momentum was repeatedly lost when the film reverted to scenes of little direct relevance. You got the message though, Poland under German occupancy was a frightening place to be for non aryans and for anyone supporting the resistance.

There have been 2 recent movies of this event - the assassination of Heydrich, the architect of the Final Solution in 1942. The only top-ranking Nazi to be so killed and a great morale boost despite the dreadful repercussions (a black and white film on Lidice the village razed to the ground where all men were murdered in revenge by the Nazis). The other film is Operation Anthropoid. Both of these movies are OK. This one focuses on Heydrich's background and youth in the first half anyway.

However, the best version is OPERATION DAYBREAK from 1975, written by Ronald Harewood, veteran screen writer who much much later won an Oscar. Stars Anthony Andrews, Martin Shore and others. THAT is the film to watch.

This one needs more editing - too much flab on it and too long. Maybe because it's loyal to the original French/Belgian novel? Not always a good thing, that. Films are not novels.

It always amazes me that these older films are often so much better, despite the special effects these days - or maybe because of them? Too much CGI is a warning sign maybe...

I have visited the church in whose crypt they end up - the pill box hole in there and the stone around it pockmarked with bullet holes, and flowers and Czech flags always there. These men were heroes.

This was filed at the famous Barrandov Studios in Prague which thrived in 1930s before WWII and then communist dictatorship by the USSR (which changed street name, BLM style as all invaders do).