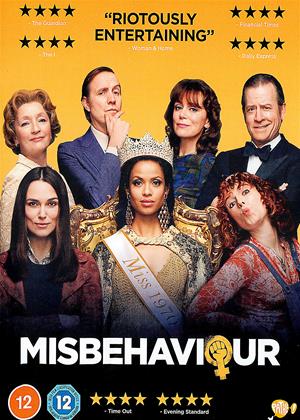 Not subtle, but a great story well told - Misbehaviour review by JB

Misbehaviour tells a remarkable story - what happened at the 1970 Miss World pageant where a Women's Liberation group caused chaos during the show and where a notable number of women of colour took part (and did pretty well in the competition), including - controversially at the time - its first black South African contestant.

The story gets a relatively unsubtle treatment, in a similar fashion to the movies Pride or Made in Dagenham. Although its speechifying and exposition-heavy style can feel clunky and contrived (people speaking in a way no real person ever would, but written to summarise debate at the time, in situations blatantly set up to let them do so), Misbehaviour gets away with it, with its otherwise lightness of touch, empathetic characters and humour. It's topped off with some energetic and memorable performances from a great cast: Jessie Buckley typically stands out but Gugu Mbatha-Raw and Lesley Manville are great too. Keira Knightley basically plays herself but she does it well.

Although not the most sophisticated movie about the themes of second-wave feminism and racism, Misbehaviour works really well as engaging, entertaining social commentary. It's endlessly watchable, very well acted and shocking in equal measure.

It is not just a 'feel good ' jolly British film, it is more serious, but wears its seriousness lightly. Women's equality, sexual objectification of women, racial injustice - these are the concerns of this film. Keira Knightly is as good as I've ever seen her, Rhys Ifans has a ball playing Eric Morley. It is pretty shocking that the cringe worthy cattle market that was the Miss World contest was considered good wholesome family TV viewing. The film shows how far we have come since the middle of the 20th century but also signals that we have much further to go. I enjoyed seeing the real people portrayed in the film before the end credits.

This film covers events that happened in my lifetime, and yet I was still shocked to be reminded how the world used to be. We really have come a long way, baby! This film brilliantly brings to life one event near the start of that journey, and engages you and makes you invest in the characters and what they are doing.

And, as with the best dramas based on real events, the final shots of the real protagonists, as the are now, with a short potted history of what they went on to do, warmed my heart even more.

I enjoy movies based on real events and real people. This film did not disappoint. Although I had arrived from Canada to live in the UK in 1970 I settled in the North and was soon busy bringing up a family. I was chastened to realise how little awareness I had of the beginnings of the Women's Liberation Movement. I was also embarrassed to recall that in the 50's my sister and I had enjoyed watching beauty pageants on TV.

They really were a cattle market and this film reminds us of the reality. We still have a long way to go....

Really enjoyed this film. Great to reflect on how times have changed in the right direction. Good to be reminded of how the Miss World Contests were run. Well done to those women who infiltrated the contest and made their voices heard peacefully.

Being an oldie I was around in 1970 so remember many of the protests and interviews of the time.

In my humble opinion this film is over-acted with most of the demonstrators being shown as manic man-hating feminists, plus there's little (any?) mention of the fact that many of the competitors were delighted to be in the contest as it gave them an opportunity to change their lives.

Shame as I was looking forward to it.

This is a very likeable British comedy drama that tells the story of the slightly wacky and bizarre Women's Liberation demonstration at the 1970 Miss World competition. The film has a charm because it plays out neatly balanced between the serious messages and the daftness of the whole thing. Keira Knightly plays Sally, a divorced single mother who has faced the in-depth misogyny in British life in trying to get a place in university. She becomes drawn to Jo (Jessie Buckley), a slightly fanatical feminist and her newly formed Women's Lib' group. Aided by Sally's more balanced approach they design posters and with the announcement of the forthcoming Miss World competition they decide on a demonstration. The odious organiser Eric Morley (Rhys Ifans) has managed to secure Bob Hope (Greg Kinnear) as the presenter but when he publicly ridicules the accusations of sexism Sally and her mates decide on a more radical attack. The film obviously attacks the ludicrous objectification of women's bodies in this 'cattle market' style event but it also, rightly and perfectly, reveals how the beauty competition did much for women of colour in other nations such as South Africa and this is exemplified especially by Gugu Mbatha-Raw as Miss Grenada, who maintains a dignity and moral seriousness in taking part. It also reveals the iconic Bob Hope to be a rather self centred, promiscuous git. This film is not a feminist rant, it alludes to the abuse that was a part of the beauty pageant world and shows the pioneering protest to open the debates on sexism. In that's sense this is a film that works very well indeed. Great support cast too including Keeley Hawes and Lesley Manville. A very enjoyable and well told film.

Cartoon version of the events surrounding the 1970 Miss World competition.

It's a pacy narrative, but it tries to cram too much in: issues around feminism, racism, conflict between generations, the role of the media, the out-of-date values represented by celebrities like Bob Hope, it's all in there but in diluted form.

The cast is good, and the big event is well staged, but overall it feels like a missed opportunity.

The closing images of the real women involved at the time provides a nice touch.

The massive irony of this metoo movie, deliberately written and directed by women, and focused on attractive young women in a beauty contest is 1) a man steals the show - Rhys Ifans as the Miss World Mecca boss is brilliant, and the man who plays Bob Hope is great too; 2) it's deeply ironic when actresses who owe their careers largely to their looks (looking at you Keira Knightley) then star in well-paid roles in movies moaning about how women are judged by their looks! I couldn';t help but smile wryly at all that irony overload.

Anyway, it's so-so, but does feel it;s written by numbers, ticking off issues one by one as so many of these metoo movies or BLM ones too - and that is boring, not a story well told. It';s like being lectured of preached at. This film, too, tries to ride too many hobby horses arguably, and falls off, resorting to crude stereotypes esp of men. The most interesting story was not told - the hinted-at corruption of the corrupt president Sir Eric Gairey of Grenada to get himself on the judging panel. It's obvious from the first act who will win even if you do not know the true story. However, in real life the woman who won was a token who was scored 2nd,3rd, 4th by most judges. Miss S was robbed!

And of course, all men are paperthin 2-D misandrist stereotypes of bigoted sexism. The only woman condemned is the mother who is shown to 'think correctly' eventually - where in fact women tend to be way more socially conservative than men, and in the 20th C and before it was an aspiration for women to be middle class and NOT work. Working class women always worked! Most men who worked for next to nothing in dirty dangerous jobs, if not killed in wars, maybe wished they didn't. Middle/upper class women had it easy compared to the vast majority of men. And for a film to condemn half the world's population is rather, errr, sexist too.

There are so many movies mocking traditional societies and socalled 1950s values; However, back then most kids grew up with two married parents and were not disturbed and anxious as so many seem to be now. I bet they do not feel very liberated by their misery.

I remember Miss World of late 70s - watched on black and white TV with my sister. Just cheesy fun. But then feminism has always been pofaced and puritan, not to mention massively hypocritical - see The Chippendales, for women leering over male stripped and The Girlie Show, Naked Attraction etc. Compared to now, the 1970s seem an ideal age of restraint and good taste!

Miss World still happens in less puritan parts of the world and is massive - run by founder Eric Morley's wife (who no doubt also inherited his wealth). It started in 1951 and is still one of the big 4 beauty pageants which are more popular than ever, even if banned by mainstream TV and, of course, the BBC (AKA the BB-She).

Having heard a radio documentary on this, I know the protest only momentarily alarmed the host Bob Hope and it really was not the massive disruption it is depicted as here. The documentary is better than this mediocre movie which is largely fiction.