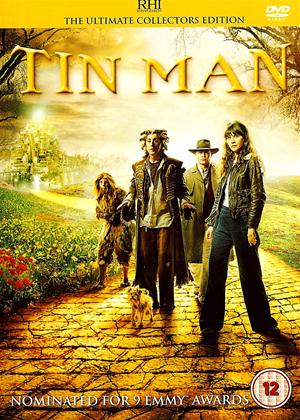 Synopsis:
Hordes of winged monkey-bats, a shape-shifting dog, a cyber-punk sorceress, and a vast hidden underworld. Get ready to follow a whole new yellow brick road. The once-beautiful ''Outer Zone'' has been zapped into a frigid and decaying wasteland, here, in the O.Z. one of its subjects, known only as lavender eyes, has been imprisoned. Her stunningly evil captor in black leather is Azkadellia (Kathleen Robertson), who hatches a nefarious plot to suck the souls out of her minions and harness the energy in an effort to bridge the gap between her world and the ''other side'' a place called earth.
But Azkadellia's prescient servant, lylo, warns his mistress of a vile presence that embodies goodness, an alarming glimmer of light and hope that could be her undoing. She is DG (Zooey Deschannel), a rebellious young woman, imbued with wanderlust and visited upon in her dreams by none other than lavender eyes and the fellow slaves whose pleas of ''save us'' urge DG to follow her destiny. DG does just that, right over a cliff into a swirling storm, face first in a debris-strewn land of double suns. Enlisting the help of three new friends the zipper -headed half-brain Glitch (Alan Cumming), a cop named Cain (Neal McDonough), and the gentle manimal Raw (Raoul Trujillo). DG embarks on a journey of deliverance along a crumbling yellow road. Where it leads is into the decadence of the Twister Cabaret, the flamboyant shocks of the Realm of the Unwanted, deep into the darkening heart of O.Z. and into the mind of the Mystic Man (Richard Dreyfus) who knows all. Here, DG will discover her role in the fate of a city, her startling connection to Lavender Eyes and to Azkadellia herself, who brings a gleefully sadistic, soul-sucking new meaning to the term sibling rivalry. Spiked with the kind of off-the-wall creatures, voluptuous villains, acid twists, and hair-raising turns that Dorothy's dreams never allowed before this knockout update of The Wonderful Wizard of Oz doesn't just go over the rainbow. It goes way beyond.
Actors:
Zooey Deschanel, Alan Cumming, Neal McDonough, Kathleen Robertson, Raoul Trujillo, Callum Rennie, Richard Dreyfuss, Blu Mankuma, Anna Galvin, Ted Whittall, Ian A. Wallace, Donny Lucas, Gwynyth Walsh, Kevin McNulty, Rachel Pattee, Alexia Fast, Jason Schombing, Doug Abrahams, Shawn Macdonald, R. Nelson Brown
Directors:
Nick Willing
Producers:
Matthew O'Connor
Voiced By:
Alexis Llewellyn
Writers:
Craig W. Van Sickle, Steven Long Mitchell, Jill E. Blotevogel
Studio:
Brightspark
Genres:
Sci-Fi & Fantasy, TV Action & Adventure, TV Sci-Fi & Fantasy