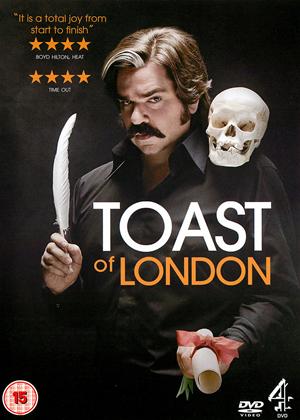 Synopsis:
Steven Toast (Matt Berry) is a RADA trained actor living in the heart of Soho's theatreland. Forced to share digs with eccentric fellow actor Ed Howzer-Black (Robert Bathurst) having been thrown out of the marital home by Mrs. Toast, and starring in a play so controversial that total strangers attack him in the street, his life is not going according to plan. Ill-advised by his agent Jane Plough (Doon Mackichan) and mistreated by his peers, we watch Toast's increasingly desperate attempts to get the career and recognition he adamantly thinks he deserves.

Reviews (2) of Toast of London: Series 1

Presumably that four-star rating comes from fans who already loved this from seeing it on TV. And obviously some viewers find it hilarious, since it's had three series commissioned (I looked it up on wikipedia to see if other people found it funny, and I was genuinely surprised to find that they did). Not having previously seen it at all, I thought I'd give it a whirl because the description sounded promising. I got through one 22-minute episode, and had absolutely no desire whatsoever to endure any more on the off-chance that it might improve.

It seems to be trying for the kind of anarchic anything-goes style pioneered by "The Young Ones" (which, by the way, I consider to be one of the funniest sitcoms ever made), but in a strangely complacent middle-aged kind of way. Everybody is a zany one-dimensional caricature with supposedly amusing eccentricities that are clumsily explained, sometimes twice, in case we don't get the joke. The main character, Steven Toast, is smug, selfish, and completely uninteresting, and although at no point during episode one does he do any in-character acting, he certainly comes across as a very bad actor even when he's just being himself. The trouble is, you need to be a pretty good actor to get away with deliberately being lousy at your job in such a way that it's funny, and Matt Berry isn't that good.

The script (also by Matt Berry, who even composed the theme-tune) is extremely basic. Very weak jokes are hammered into the ground, and about half of them revolve around the concept of a beautiful young African woman being transformed by botched plastic surgery into an exact replica of Bruce Forsyth. This is treated in the crudest and laziest way imaginable, as if the concept was in itself so funny that no proper jokes needed to be written around it. The other gags are mostly just as bad. Quite often you can guess the punch-line in advance because it's either painfully obvious or simply old. At one point, our hero suddenly walks off the set so that we see the back of the scenery and the studio audience. Why? There's no reason for it, and no actual joke is made, but hey, breaking the fourth wall is hilariously adventurous and wackily random!

And worst of all, every so often somebody self-consciously uses an oddly stilted and completely unfunny bit of Very Strong Language in an obvious attempt to say: "Hey, you at home! I just said not only the f-word but the c-word too! Is this daring, sophisticated adult entertainment or what?" I would have to answer in the negative. Perhaps the other five episodes on this disc (and there's a pilot as well, if you're a glutton for punishment) are side-splitting masterpieces of grown-up Surreal hilariousness. But since writers of TV comedy series tend to put the best gags in the first and last parts so you'll be instantly hooked and left wanting more at the end, I would guess not. And I simply couldn't be bothered sitting through any more of this dreck to find out.

This Toast should have been Burnt before serving - Toast of London: Series 1 review by Birodewal

Toast has got to be the worst ever sitcom, although it was more Sic than Com. The ideas could have been good as they delved into most everyday problems, but their handling of them was awful. I had to give up after the second episode for the sheer lack of comedy. The language was foul and unnecesary and did not enhace the comedy. You never needed foul language in shows like Monty Python, Red Dwarf etc etc. I for one shall not be watching any more of this show.