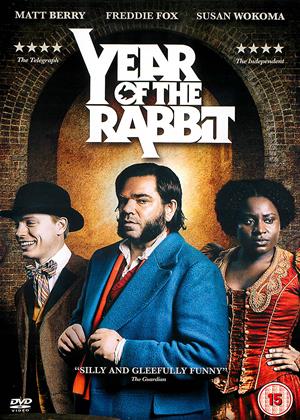 Reviews (1) of Year of the Rabbit

Not up to expectations - Year of the Rabbit review by TE

I really like Matt Berry's work, especially 'Toast of London'.

Compared to that series 'Year of the Rabbit' has a big budget and plenty of stars and lavish sets. But it ain't nearly as funny.

There are some good moments but I found it quite a disappointment. The cod cockney accents and the pseudo-Victorian underworld language become laboured after a while.

It's not silly enough to be a knockabout farce type comedy, and it's not rich enough in invention to stretch beyond a couple of episodes, it just gets a bit tiresome.

Matt Berry thrives in a more anarchic and free role. This has the feel of a comic sketch drawn out way too far.

Year of the Rabbit review by Mark McPherson - Cinema Paradiso

Matt Berry is just one of those actors you feel as though you have to use him in some brilliant way. With his loud voice, rich tone and pompous posture, he’s someone you won’t miss. But how to use him? He’s been featured in numerous sketch comedy programs and voiced plenty of cartoon characters. Yet since his role as the arrogant boss of The IT Crowd, he had yet to find a project that could make great use of his prowess. That was until Year of the Rabbit, placing Berry front and center in a role that fits him perfectly.

He plays Detective Inspector Eli Rabbit of Victorian London, a cocky man who plays by his own rules loudly and proudly. Stooped in booze and cases, he’s not keen to have a new partner with the hapless Detective Sergeant Wilbur Strauss (Freddie Fox) tagging along on the streets. He’s even less excited about another new addition to the force with Sergeant Mabel Wisbech (Susan Wokoma), the first female on the force. They predictably clash but in more witty ways than one of mere misogyny and ageism. This is mostly because his partners are easily able to keep up with his lewd and vulgar repartee, bickering amid cases about everything from beer to poop.

The series place as a sophisticated Adult Swim period piece of sorts; one competent enough to stage a believable Victorian London while never shying away from crude conversation for the most laughs. Characters often become distracted from their murder cases as they attempt to infiltrate the filthy streets and criminal underworlds for clues and information. It’s a staging that is fairly familiar for Berry’s sort of sketch but has enough confidence to linger longer on the most interesting meanderings than cut off abruptly. The connection of a case helps keep things on track and the episode moving, even if most of the time is spent goofing off in elaborate costumes and settings.

This is perhaps the greatest appeal of the show in that it takes the format of a period piece procedural and mucks about within its setting, never taking its serious setting all that serious. The writing harps on the era and gets caught up in conversations that don’t so much poke fun at the era as skewer the very nature of the buddy cop genre. There’s a savaging of convention, a mockery of history, and a general darkly comedic tone that displays a silky embrace of the sorrow of the times. And after having sat through a slew of more earnest productions, this is the perfect chaser for the more stuffy of British period pieces.

Year of the Rabbit is just about everything Berry deserves for his own headlining series, armed with a fantastic cast and a decadent setting. The full range of his comedy is let loose, placed in a role where he can let that inner insincere character come out and play, mucking about in a filthy setting ripe for his slander. Series creators Kevin Cecil and Andy Riley have crafted one heck of a comedy series that defies a mere palpable punch of sitcoms, buddy cop tropes, or period piece pageantry.