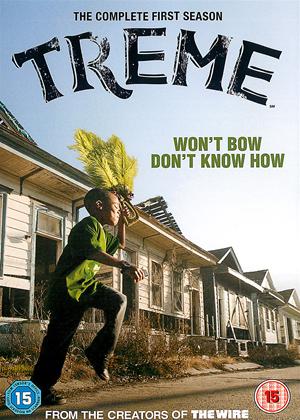 The only folk who won't like Treme are those with

b) an objection to sex and profanity

c) no interest in New Orleans culture, or in any other culture but their own.

So if you don't fall into the above categories, may I recommened this absolutely wonderful series, (pronounced Tre-may). David Simon, a flaming genius in my grumble opinion, has applied the same production, writing, directing and acting values as he did with The Wire to this story of the Crescent City after hurricane Katrina (August 2005). Only this time you have WONDERFUL music as well. Assorted luminaries including Elvis Costello, Dr John, Alain Toussaint, Steve Earle (who has a big-ish part) and heaps of jazzers and blues artists pop up playing and singing. The playing is superb, once you get used to the vernacular, with so many stand out actors that it's impossible to choose one over another. My one complaint is that it's not long enough, and we'll have to wait months for season 2. A companion piece would be Spike Lee's When the Levees Broke, one of the best documentaries I've ever seen, and I've seen tons of them.

I am afraid I could not understand this not even with subtitles on. I persevered for about an hour and a half and then decided that life was to short.

Treme is a mixed genre show boasting an ensemble cast set in the Treme district of New Orleans after the devastation of Hurricane Katrina in 2005. From the makers of The Wire Treme has received incredibly positive reviews all round, many partially noting its soundtrack. The show is undeniably rooted in it’s Louisiana setting; the southern heat of the sun coupled with the on-going turbulent relationship between the Treme locals and police come seething out from the New Orleans jazz music, whilst the thick honey-like accent makes the characters unravel into genuine and believable Louisiana folk.

The show has a very varied ensemble cast, ranging from the effervescent John Goodman and CSI: Miami’s Khandi Alexander to The Wire’s own Wendel Pierce; each of the characters find their lives affected, and quite often devastated, by the hurricane. Goodman, who plays author and academic Creighton Barrnette, is politically enraged by the Government’s apathy toward New Orleans after Katrina, whilst Pierce’s character, a jazz trombonist is constantly looking for work in a city where few have the money to spend on their homes, let alone local music.

Yet the music of New Orleans reigns and rumbles through with every swell and dip in the show’s plot. The casting and music are both completely deserving of the strong praise the show has received. Other aspects of the show have been a little problematic however; the show does not seem to know where it lies generically. It was marketed as a political drama, with much emphasis on the destruction of New Orleans, yet there is little of the tension and vigour of a political drama, rather the show chugs along like a heavy steam train, crushing all the weaker things that lie before it, but providing you with ample time to vacate the tracks.

The show is almost meandering at times, the ensemble cast means that the show lacks any real hook, the only pull being the emotional intrigue felt for the characters. Luckily the characters are strong enough to hold your interest, but the less patient of us may struggle to get past the first quarter of the series.

For a show that is seemingly based on a catastrophic disaster, very little seems to happen, each of the characters is troubled by some change brought on by the hurricane, yet there are no cliff hangers, no moments of suspense or even particularly strong plot lines. Treme is at its heart a simple relationship drama, that searches out the good and the bad brought out in people by natural disasters. It delves into the hearts and souls of the people living in Treme and allows us a truly honest look at humanity.