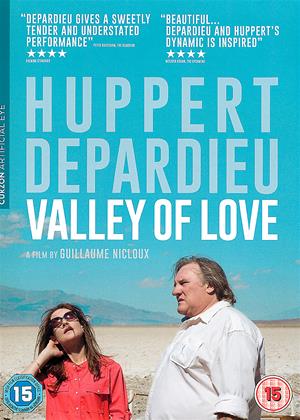 Reviews (4) of Valley of Love

I loved the fact that the plot of this film relies on a series of events that can't/could not have happened and the meaning of which are not spelled out. But the main point of the film is not really the plot but the relationship between the two main characters. The setting is perfect, and like the film marries the banal with the extraordinary. You can feel the heat

What I don't like about this is the ridiculous plot (a divorced couple come together at their dead son's wishes to see his ghost). But the acting is unmatchable. Their subtle body language makes so much possible and draws you into trying to work them out. The style is slow, too slow I think to be popular. This is a chillax film (don't you just love that word?!)

Huppert and Depardieu excellent - Valley of Love review by fm

Truly Madly Deeply spawned a lot of pleasant romantic fluff and this one is in the same ballpark.The two leads are very good indeed and the multiple settings in Death Valley are splendid, but there's not too much else to write home about.The story is a load of aimiable twaddle, best forgotten.

This film starts OK - then gets gradually more up itself as time goes on. I suspect lots of the over-rated reviews are from fans of the 2 famous lead actors, and the blurry of real/unreal lines here is just plain weird.

If you like spiritual stuff, this may be your bag - I hate that sort of thing, so it annoys and bores me. If the Brits had made this the same people praising this film to the skies would be slating the film. Lazy, pretentious film-making. And boy the plot is silly, incredible and the third act made me want to chuck stuff at the screen - common sense, for example, and enlightenment values.

And I just did not believe the plot, not even from a French writer/director - and oh how they love their ponderous non-plots in French films where sod all ever happens. Some reviews call that 'whimsical'; others would call it SLOW or maybe 'boring'.

Best of all in this film, I enjoyed the scenery - lots here set in the scary desert of Death Valley, USA - so I took that in when the cod-spiritual nonsense got too much.

Valley of Love is a case study of Depardieu and Isabelle’s charm and witty comebacks as elder actors whose days of glory are long past gone. Still, their antics and mannerisms provide for an entertaining viewing despite some key flaws present in the script by both screenwriter and director Guillaume Nicloux, and translated by David H. Pickering for the English speaking audience. To sum it up: Valley of Love is an excellent French black comedy/drama flick that most audiences can survive without checking it off their planned repertoire list, but it’s nice for one to have seen it anyway.

The film features two famous French actors going by the names Isabelle Huppert and Gérard Depardieu, which most non-French speaking audiences will instantly recognize. Their on-screen charm and chemistry sees them playing an alternate version of their true personas, using aliases that in their entirety resonate with their true names: Isabelle and Gérard. Namely, the two stars come together yet again to celebrate what’s left of their mutual passion toward one another, but a strange letter from their son Michael makes them question everything they knew thus far.

In continuation, Valley of Love brings many memories from days long gone by, sprouting nostalgia like it’s no one’s business and spreading rumors as to why exactly these strange events occupy the lives of these very strange fictitious/real characters played by the recognizable French duo. Often times, G and I turn messy, surreal dialogue that no one would dare to utter in real life into one of the great banters of the 21-st century. Replace our two heroes with any other two faces instead, and they would inexplicably ruin what is an otherwise buttered, smooth ride toward a surreal end – French or no French.

Furthermore, Valley of Love packs fairly reasonable amounts of nostalgia to deliver a punch straight to your gut, or as some call it: a gut-wrenching drama. Viewers are not really sure as to what really happened and why: it’s as if those surreal elements of films like Amelie or La cité des enfants perdus somehow got their long overdue screen time, with which they infiltrated G and I’s minds and forced them to do, well, let’s say strange things.

Finally, Valley of Love’s ending can leave lot of people frustrated, because it doesn’t provide answers to questions raised earlier during the building of the plot. And for that reason only, it’s possible that Valley of Love would remain distant mystery for some potential viewers who want things to wrap up to a clear conclusion.

To conclude, with its mysterious and surreal atmosphere, music featuring pads that’re stretching across scenes and improvised dialogue between the two French stars that feels as natural as an everyday occurrence - Valley of Love is inarguably a real piece of cinema excellence.