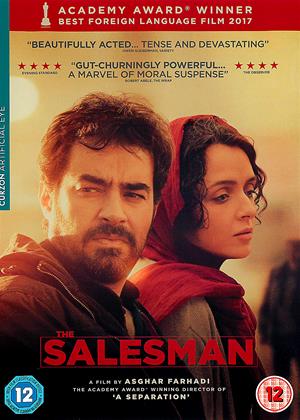 Reviews (2) of The Salesman

This is an unusual foreign language film. The main characters are husband and wife actors. They move apartment and she is attacked. The rest of the film is then working through who may have attacked the wife introducing other characters and also the balance of the theatre production the main characters are involved with and the main storyline as the drama unfolds.

It is a slightly slow moving film at times but then you get used to the pace and it is quite thrilling and tense.

Some of the acting could have been a little better for me but overall it is a good film. Not sure what's missing for me, but there seemed something, hence 3/5 score, if I could give it 3.5 I would.

A film with a difference - The Salesman review by BE

An unusual and interesting storyline, tackling a disquieting theme. Plods along in parts but this only adds to its charm. Beautifully acted throughout by the whole cast.

The Salesman (aka Forushande) review by Adrijan Arsovski - Cinema Paradiso

The Salesman is a poignant, slow-burning drama with a dramatic punchline that comes later in the third act of the film. And boy does it sting. It’s also complex and thrilling, playing with moralities and what means to stay loyal until the end. When one comes to better think of it, The Salesman is in fact a juicy revenge tale served cold; but it’s also masked (in trailers and promotional materials) as a boring home drama, which is an odd choice of the marketing team all things taken into consideration. Finally, The Salesman features some of the best acting work ever put to screen, and for this fact alone – I wholeheartedly applaud the film for digging out such long-forgotten pleasures and enamoring us the audience with such unparalleled delights.

Cynicism aside, the film follows Emad (Shahab Hosseini) and Rana (Taraneh Alidoosti), who incidentally enough are actors themselves; they move in to their new home, but find it hard to connect due to a recent stressful event concerning a violation of their privacy in their home. And so, they gather their strength to power through a local play of Arthur Miller's 'Death of a Salesman' (meta much?), only to find out that there’s more than meets to eye in regards to them both.

In particular, Shahab Hosseini as Emad gives the performance of his lifetime. His portrayal of the conflicting Emad comes off as raw, authentic, and deeply unique in its own way, as we follow the character’s further descend into doubt and degradation. Moreover, some of the script pushes forward changes that would be hard to believe, but Shahab manages to subtly thread these changes and showcase how a true talent does their work. When I come to better think of it, Shahab HOsseini’s performance is what keeps The Salesman afloat, and without him we wouldn’t have got what the film ended up being in the first place.

Secondly, Shahab’s magnificent performance should be also linked to Asghar Farhadis tight direction; what the director does here is slowly build the drama, in an unnerving development that would, as mentioned above, blow up in the third act in a dazzling display of narrative structure and decisive culmination. None of the unravel feels force upon the characters; it flows naturally and intertwines with the moral ruminations of both characters alike. In fact, it would be a grave error not to acknowledge Taraneh Alidoosti’s acting as Rana as well, which is calculated, timely, and as real as it gets.

Finally, The Salesman is a riveting revenge drama (plus thrills) that pushes against traditional filmmaking and brings a novel approach to the table. This approach works better than any other formulaic drama would make you think it does, and to this extent, The Salesman is a brilliant piece of cinematic brilliance. Yes, I’m deliberately putting in “brilliance” in there twice.