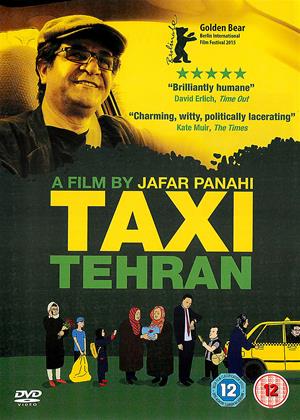 Synopsis:
A taxi driver is driving through the streets of Tehran. Various passengers enter the taxi, each candidly expressing their views while being questioned by the driver who, it transpires, is no one else but the film director Jafar Panahi himself. His camera placed on the dashboard of his car transforms the space into a mobile film studio, and captures the spirit and contradictions of Iranian society through this comedic and dramatic drive with a sting in its tail.
Actors:
Jafar Panahi
Directors:
Jafar Panahi
Writers:
Jafar Panahi
Aka:
Jafar Panahi's Taxi
Studio:
New Wave Films
Genres:
Action & Adventure, Comedy, Drama
Countries:
Iran, Action & Adventure, Comedy, Drama
Awards:

This is such an original film giving proof, if ever one was needed, to the maxim that real life is stranger than fiction. The characters that inhabit the taxi are gems in all their self-interest, altruism, courage, boorishness and intelligence. The situations at times unbelievable whilst their reactions leave you angry, laughing and finally full of admiration for those having to deal with an autocratic government with such resilience.

Taxi Tehran is funny yet touching, simple yet downright effective affair, serving as a wakeup call for human civilization, where a seemingly mundane event such as a cab ride proposes a simulacrum of the Iranian society, the oppressive nature of its current Iranian regime and the illusory freedom of an Orwellian nightmare. It’s a small thought experiment made with passion, subtlety and humor – a glimpse of a healthy looking apple that’s long past rotten inside.

Director Jafar Panahi is banned from making movies in Iran. Even so, he’s not given up: Taxi Tehran is made with dashboard cams strapped all over a taxi interior, as to circumvent the 20-year film-making ban imposed by the Iranian government, a witty action worthy of a grade-A trickster. This makes it that more important for people to see it: freedom of speech and of body was not always a given – wars were fought, Empires were divided over the simple right for one to have control over his own body and thought. In modern-day Iran, it seems people walk, talk and interact freely, but as it turns out – this is certainly not the case. Controlled freedom is no freedom at all.

Taxi Tehran stirs up ideas, provokes contemplation and asks tough questions about Iran’s politics and agendas, though doesn’t act superficially while doing so; its language is that of the colloquial, everyday speech, spoken by both ordinary people and amateur actors. As most things in life however, every coin has its two sides: while some oppose the sharia law and capital punishment, others endorse such repression acts thinking it’s in the best interest, of course – excluding themselves from it. The backside of director-turned-cab-driver Jafar Panahi turns to a battleground as two passengers clash opposing arguments, both convinced in doing the righteous deed. It seems the apple is rotten from inside out.

Panahi’s odyssey leads him to pick a significant number of diverse passengers: a man resorted to digital piracy (who recognizes the director), a marginalized woman, a seemingly hurt man whose worries include inheritance, two women fighting, and finally – the director’s niece among plenty of others. All of these people carry their own life burdens, tell their life stories to a driver they hardly know, and continue to muster their mundane affairs upon arriving to a certain destination. Desensitization becomes a major issue in and out of itself.

The film’s flaws are not bound to ideas, rather of their execution: in scenes where Panahi wants the audience to acknowledge given superstition and poverty, the spell slows down to a crawl. Thankfully, such moments are rare and don’t interrupt a rather seductive matter.

To conclude, Taxi Tehran is well worth a viewing or two, if not for a sociological purpose – then surely for Iranian director Jafar Panahi’s will of steel.