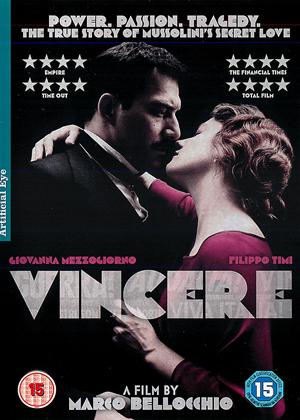 A very Italian tragedy that is, in its own way, a masterpiece - Vincere review by Philip in Paradiso

Vincere (in English, 'To Win') is an Italian film based on the life of Ida Dalser, who had a torrid affair with Fascist leader Benito Mussolini in Italy, from 1907 to World War I. (In 1907, he is a member of the Socialist Party.) They have a son together. She will say, to the end of her life, that they were married.

Ida Dalser was clearly, madly in love with B Mussolini. The film tells us what happened to her, as it swerves between melodrama and tragedy. Rather than a movie about B Mussolini, it is a film about her and her self-destructive, limitless passion for the Italian leader, seen through her eyes. In this respect, it is highly original and quite fascinating.

The film's plot is quite simple; the movie is classically constructed and acted. It is, from a narrative standpoint, perfect, however. The acting is compelling and Giovanna Mezzogiorno as Ida Dalser is remarkably beautiful. It is worth noting that Filippo Timi, as both Benito Mussolini and his son, suffers, in real life, from a very heavy stutter (according to his Wikipedia page, he is also partially blind), which you cannot fail to notice if you watch the interview with him in the 'bonus' segment of the DVD: when you see the film, you wouldn't know. It is possible that, while in the process of acting, he becomes a different person and totally loses his stutter.

So, in many ways, this is an exceptional film, which has much beauty that it depicts, despite the dark times it refers to and the tragic tale it narrates. I strongly recommend it. I don't think you will ever forget it, once you have seen it.