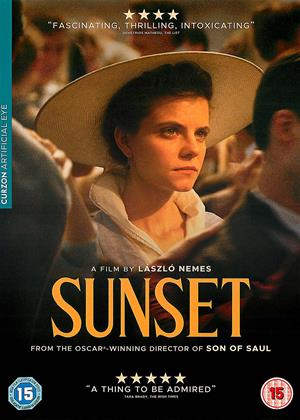 Bewilderment and decadence in pre-1914 Budapest - Sunset review by PD

László Nemes’ film is set in Budapest on the brink of World War I and depicts a refined world careering towards chaos - his aim being to capture with disorienting images the period just before Europe’s leaders committed collective suicide. Some reviewers have suggested that “Sunset” could be his flip-side to Murnau’s “Sunrise”, a film similarly tackling human emotions buffeted by modernity, but for me I was more reminded of Holly Martins’ flailing attempts at constructing meaning in post-war Vienna during his search for the ‘third man’.

Irisz Leiter (Juli Jakab) arrives in Budapest from Trieste looking for work at the city’s most renowned millinery establishment, which not coincidentally bears her name. Orphaned in mysterious circumstances (never revealed) at the age of two, she’s trying to connect with her legacy through the shop her parents once owned, but the new proprietor Oszkár Brill (Vlad Ivanov) sends her away, clearly threatened by her presence. Stepping out of the boutique’s rarefied atmosphere into the cacophonous streets of 1913 Budapest thrusts her into the jarring hubbub of modernity. At a boarding house she’s attacked by Gáspár (Levente Molnár), an unstable coachman muttering something about the Leiter son; Irisz knows nothing about a brother, so tries to find some answers. The information she gathers is fragmentary and troubling, but she persists in her search, which is full of strange encounters with menacing figures who hint at things without ever revealing anything concrete.

By this time, it becomes obvious that script narrative coherence isn’t what Nemes is aiming for, and making sense out of how people are connected Dickens-style is something of a lost cause. But in terms of sheer visual impact, Mátyás Erdély’s screenplay impresses, wandering through the impressive sets with a dreamlike episodic quality worthy of Kubrick, as Irisz keeps searching for answers neither she (nor the audience) ever find. The mystery here is in what’s happening rather than why - the film creates a destabilising atmosphere in which the decadent upper classes indulge in perverse machinations while the city around them seethes with discontent and violence. This is all of course leading to an inevitable clash, which Nemes (perhaps unnecessarily obviously) thrusts home with a final shot in the trenches, which is presumably a premonition of an impending catastrophic war and a change in the world order, a bleak reminder of the carnage that marked the start of the modern era. Nemes pointedly uses an array of ultra-splendid hats as symbols of extravagant uselessness soon to be tossed onto the bonfire begun in Sarajevo, although here they remain objects of beauty rather than something, aka ladies’ day at Ascot, merely something to be ridiculed.

Jakab is barely off screen, often seen from behind as the camera prowls near her neck much as it trailed Géza Röhrig in ‘A Son of Saul’. And Erdély’s screenplay is used to disorientate, to deliver a deliberately convoluted narrative of a disconnected nightmare. As a result, the film will divide audiences, and many will find it totally unwatchable, but as long as you can cope with the lack of a conventional narrative thread, there’s much to admire here.

Fascinating, but not for everyone - Sunset review by JB

László Nemes has created an intoxicating film here... I found it completely absorbing and almost hypnotising although I understand why some find it dull and incomprehensible. But there's clearly nothing like it.

Irisz Leiter (Juli Jakab) is quite a blank central character. Which can be frustrating, particularly because she's barely ever offscreen. From the opening minutes, it looks like she will spend the course of the film pounding the streets of pre WW1 Budapest trying to locate the brother who she's only just discovered exists and become less opaque. But it becomes apparent that director Nemes is more interested in finding out about the soul of Budapest and Hungary... And exposing the corruption of the elites and the simmering tension on the streets. The blankness of Irisz then makes more sense... She's an everyman type, and a focal point the events can reflect off. This becomes particularly clear when we see the unsettling relationship between the millinery company she initially wants to work for and the royal court.

This makes it all sound horribly dry but I'm pleased to say it's really not. What makes it work is the atmosphere, the glorious costumes and sets, the epic setpieces we only glimpse (the fair/festival in particular), the camera work, the point of view it's all told from. Like Son of Saul, Nemes' camera stays in tight close shot to the protagonist. It's history from an incredibly intimate, human vantage point. We see the grime on the otherwise glorious period costumes as they sweep across the dirty city streets. We see the frustrations in the eyes of the workers.

Perhaps it's too long, perhaps it did need a stronger backbone of plot. But taken on its own terms, it's unique and kind of wonderful.

Somewhat baffling - Sunset review by as

It was always going to be a hard act to follow up the exceptional 'Son of Saul'. Whilst beautifully filmed with some lovely contrast scenes between the light and dark. I am afraid that the film, starts off with a story, it then looks like the rest was patched up as it went along which leave the viewer or me anyway, completely baffled as to were it was going and sadly before the end not caring.

Sunset - Not my Cup of Tea - Sunset review by AW

I had high hopes for this film, but I am afraid that was 2 hours of my life I will never get back. It was very dark and moody, not my cup of tea.

What one looks for - Sunset review by DF

This movie has taken some harsh criticism, but perhaps as with many movies one find what one looks for; if it's not 'your' movie, then it will be dismissed.  I liked this movie and I found it absorbing and intriguing.  As a period movie, its production was excellent, costume, set piece scenes all very beautiful together with some rather gothic and dark set pieces. Lili Jakab plays the central character Irisz with stoic conviction.  For me, what I found absorbing was the time and place of the movie's setting; Budapest on the eve of WW1 and the collapse of the Austro-Hungarian empire.  It seems to me that, in the movie, the director Nemes is working to a background of violent tumult and social upheaval and revolution.  The central character Irisz, who comes to Budapest in search of work in a posh hat shop previously owned by her parents, appears as a character providing a narrative thread to a formulized story (a search) set within a society steeped in bourgeois corruption and obsequiousness to a dying and decadent ruling aristocracy.  The story of Irisz's quest to find her supposedly unknown brother takes her into dark places and meeting with dubious (usually bearded characters) who appear to belong to an anarchic revolutionary movement, led by her brother. Nobody wants to talk of the brother; these revolutionaries are not averse to assassination and hat shop destruction. Irisz is warned several times it would be best to leave town. Irisz's meeting with her brother does not end well.  To me, her journey to meet her brother (by river), and subsequent events have shades of a Joseph Conrad novel and perhaps a nod towards Coppolla's Apocalypse Now.  Near the end of the movie Irisz ironically transmogrifies into her brother (this might be a little far fetched).  Irisz does appear again after the movie has apparently ended, in one of the most harrowing and extraordinary scenes that I have ever seen in a movie.

Forget a coherent plot here: the film is maddeningly opaque and baffling. The characters, especially the heroine, seem to be in a kind of trance throughout and do not behave as humans usually do. The dialogue is risible. There are pretensions to a 'great work of art' by alluding to the events at the demise of the Austro-Hungarian Empire, but it plays more like a bad dream, and, as everyone knows, there is nothing more boring than having to listen to somebody telling one at great length about a dream they had.