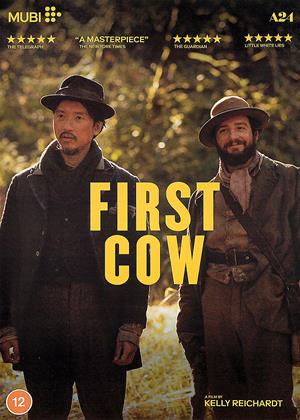 If you know director Kelly Reichardt (eg Meek’s Cutoff) you’ll know her films are deathly slow. As soon as this opens you know you’re in for a long haul, with still shots that go on forever. 15 minutes in and all that’s happened is that someone has picked some mushrooms. Then it gets worse. At least you can see the mushrooms. Much of the rest is filmed in darkness because there was no artificial lighting back in Old Oregon, don’t you know.

The thing is, you see, Kelly doesn’t make films. She seems like a nice person, but she makes anti-films. Which must be why the arthouse crowd like her, because otherwise her success is unfathomable. She even films in the old 4:3 ratio, apparently for close-ups but patently because the big wide screen is beyond her capabilities. She should exhibit in a conceptual art gallery for like-minded souls who think Duchamp’s urinal constitutes high art. A cow appears in a few scenes.

Here’s some advice, Kelly. Open up the screen, learn what a camera can do, learn to compose a shot, learn to edit, stop shooting in the dark, give your actors more to do than mumble and add at least a modicum of life to the occasional scene. In short, watch some real films and go to film school.

Kelly Reichardt’s wonderful film opens with a present-day scene involving two neat skeletons being found side by side by a curious dog and its owner, who treats the find like a professional archaeologist. It doesn't take us long to realise that these are the bodies of Cookie Figowitz and King-Lu, the friendship of which the film concerns itself. Their remains are remnants of a long-gone West, namely 1820s Oregon - its mélange of business and trade, origins and ethnicities, together with its opportunities and dangers, superbly depicted. John Magaro is spot-on as as Cookie, a humble Jewish cook travelling West from Maryland with a gang of fur traders who seem to hate him, his performance beautifully complemented by Orion Lee as King-Lu. on the run from killing a man. Their friendship is quickly kindled; the men move in together out of the completely natural instinct, often shared by outsiders, to stick together. Lee takes the Western trope of the indecipherable East Asian outsider, typically a complete non-character, and imbues King-Lu with a magnetic cleverness—something intriguingly at odds with Cookie’s humility, in that it could work to Cookie’s benefit or his complete demise. Magaro, meanwhile, is an actor with the kind eyes of a saint - the scenes involving him sweet-talking a cow into relinquishing her milk are tender and totally convincing.

But the men’s friendship isn’t the only story of First Cow. It’s the seed of something larger, portended by way of William Blake in the film’s epigraph: “The bird a nest, the spider a web, man friendship.” This being a Western of sorts (but don't expect any 'action' - Reinhardt is in no hurry at all), tensions arise from the broader problems of commerce and ambition that beset these men. Capital, the film reveals, is sustained through intimate transactions, be they the lowly designs of propertyless men like Cookie and King-Lu, the face-to-face haggling of culture and craft between whites and Natives, or the deals people apparently make with nature and fate. King-Lu is the guy with a mind for business, who takes Cookie’s humble ideas—the man just wants to bake!—and, through acumen and risk, makes them plausible, but, inevitably, Cookie and King-Lu find themselves enmeshed in the sort of trouble that arises when the have-nots try to make a way in the world for themselves.

Throughout, Reichardt successfully undoes the traditions of Western iconography - in place of the vast and symbolic possibilities of Monument Valley as with John Ford, we get tight, local depths based on forests and local life, whilst her emphasis on specific slits of character—the holes in Cookie’s boots, the sensual waves of his honey dipper as he lovingly garnishes the oily cakes that become his trade—has the effect that untouchable horizons and broad vistas do in more traditional Westerns. At the same time, here, as with Reichardt’s other films, the characters’ lives are whittled down to spirit-shaking, material choices, decisions that at times literally set the course for the rest of their lives.

There's a few little implausible plot contrivances in the last sequence, but given what went before one is swept along nonetheless. Poignant and highly intelligent filmaking.

With another direcotr, First Cow would’ve either been a melodramatic minutiae of 19th century living or a stirring heist picture with Americana twang. But director Kelly Reichardt pretty much delivers on the satisfyingly contemplative nature her films are known for. There’s an ease and awareness to such picture that even when it deals in the dangerous there’s a harmony to it all. Her film not only allows us to get to know and love the story of two men trying to make ends meet, but also gives us an air of gravity to the era, letting us feels its dirty and lonely essence.

The story concerns two men who have fallen into dangerous lives. Cookie had dreams of being a baker but settled for being the cook of a group of mean fur traders. King is a Chinese immigrant on the run from some Russians after a crime he committed out of desperation. The two meet under cover of darkness when King is on the run and Cookie is all alone. King asks for help and Cookie, ever the kind soul, offers the fugitive room by his fire and a meal for his stomach. They’ll part ways, but end up finding each other again at a tavern. King then invites Cookie up to his cabin and they hit off their relationship well, telling jokes in between contemplating their futures.

Cookie dreams of baking again and tells King that he’d love to make biscuits. All he’s missing to make them is milk. The good news is that there’s a cow in the area. The bad news it belongs to a wealthy British elite, unwilling to share his livestock’s bounty with anyone. King, having already broken the law before, recommends they just steal the milk under cover of darkness. His outlook comes from an opportunist angle that he doubt adopted from the mindset of conquering North America. There’s a moment that perfectly encapsulates this tone when Cookie and King wander through the wood, harping on how America is still early in its development of history and that they have the opportunity to seize it early. The milk, King feels, is that moment. Sure enough, Cookie’s stealing of the milk brings biscuits. Biscuits bring profit. That profit, however, attracts the rich English owner of the cow who intends to hire Cookie as a baker for his estate.

While the story does get tense as the fear of discovery mounts and bubbles over in the more fearful third act, it was always felt that there was a gentle charm to the whole experience. Cookie has tenderness to him that can be felt all around. Some of his best moments are between him and the cow, delicately speaking earnestly with the milk-giving animal in a manner that is calm and sweet. King has a warmth to him that is so infectious it’s easy to understand how Cookie agreed to midnight milk thievery so quickly. He has a chipper spirit, an inviting nature, and is so grateful for the company of Cookie. They have such a great connection that when they’re split apart it’s heartbreaking and when they reunite it’s a great relief.

Reichardt’s direction is slow yet engrossing, allowing many nothing moments to make the environment have its own voice. This is perhaps most pronounced in the opening scene which reveals the ultimate fate of Cookie and King in modern times. That scene may seem like nothing in that we don’t return to the present, but it does give a focussed perspective on what the film is trying to tell us about the American landscape, in both nature and business. Even for being a film that clearly takes dead-aim at capitalism, there’s an exceptionally enduring edge to how it portrays its characters as just trying to get along and do what they love. Even the more antagonist English owner of the cow as well as the victimized Native Americans of the region don’t seem as bound by prejudice, at least to the exaggerated degree that is often favored for period pieces.

First Cow is such a perfectly paced film that finds a warmth amid its grimy struggles of 1820s America. It’s certainly not going to be everybody’s cup of tea (or glass of milk?), those willing to let the film flow over them will find a uniquely human picture that tries to find some connection with the land we occupy and how we use it. It’s another strong film from the already accomplished Reichardt.