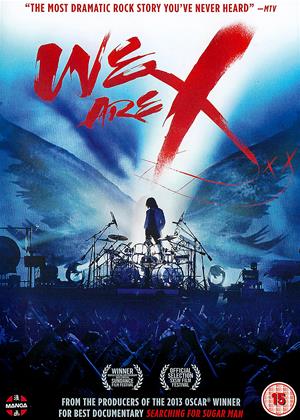 Synopsis:
From the production team behind the Oscar winning 'Searching for Sugar Man' comes 'We Are X', a transcendent rock and roll story about 'X Japan', the world's biggest and most successful band you've never heard of... yet. Under the enigmatic direction of drummer, pianist, composer, and producer Yoshiki, 'X Japan' has sold over 30 million singles and albums combined - captivating such a wide range of admirers as Sir George Martin, Kiss, Stan Lee, and even the Japanese Emperor - and pioneered a spectacle driven style of visual rock, creating a one of a kind cultural phenomenon.
Chronicling the band's exhilarating, tumultuous and unimaginable history over the past three decades - persevering through personal, physical and spiritual heartache - the film culminates with preparations for their breathtaking reunion concert at New York's legendary Madison Square Garden. Directed by acclaimed documentarian Stephen Kijak, 'We Are X' is an astonishingly intimate portrait of a deeply haunted - but truly unstoppable - virtuoso and the music that has enthralled legions of the world's most devoted fans.
Actors:
Yoshiki, Toshi, Pata, Hiroshi Morie, Sugizo, Gene Simmons, Wes Borland, Richard Fortus
Directors:
Stephen Kijak
Producers:
John Battsek, Diane Becker
Others:
John Maringouin, Mako Kamitsuna
Studio:
Manga Entertainment
Genres:
Documentary, Music & Musicals, Performing Arts, Special Interest
Awards:

Reviews of We Are X

We Are X review by Adrijan Arsovski - Cinema Paradiso

We Are X is as flamboyant, as weird (in a good sense), and as unusual as you can imagine an underground culture product from Japan can turn out to be. The film depicts the trials and tribulations of X Japan, a popular rock band in, you guessed it – Japan – and their successive rise to stardom as the founders of a new genre dubbed J-rock. In fact, if we’re being honest, one can compare X Japan to the likings of renowned bands such as The Rolling Stones or even AC/DC – whose erratic but charming demeanors had earned them a well-deserved spot in history. Which consequently is what X Japan is all about, and more.

The film is directed by Stephen Kijak who, amidst a recent barrage of mockumentaries, find footages, and other cynical anti-masterpieces, has managed to produce an honest, energetic piece of celluloid tape that stands true for what it is. His filmmaking touches are also present, as evident to the many unique techniques that he used to make We Are X; some of which include the inclusion of many personal photos and videos from the band’s personal collection, and among them a video shot by David Lynch himself.

Further, the film brims with dynamism, brightness, and a sense of constant flux. The structure of the story changes constantly, hoping of from the everyday doings of band leader Yoshiki Hayashi, through his ruminations on life and death, all the way to the other musicians’ hard work during their preparations and main events as well. As the narrative unravels, so to the film picks up its pace, showing the audience but a glimpse of X Japan’s numerous rehearsals, performances, and backstage footage, as we follow their personal confessions in front of the camera. These confessions are not to be taken lightly, as the band talks about times past gone, their youth, personal tragedies, and other events that shaped their characters during the years and led them to an ultimate triumph of wit and will.

We Are X is not a fairytale, but rather it depicts a brutally real tale of how real life can influence the professional careers of multiple people, such as the death of a band member, or a vocalist who succumbed to the influence of a sect. All of these events are provided by archive footage, which is as real as it gets.

All things considered, We Are X is a deeply personal and touching story where life and career intertwine and ultimately lead to both inner and professional growth. Plus, the film features numerous interviews with Marylin Manson, Gene Simmons, and Stan Lee, who are personally familiar with the band’s work and music and are also acquaintances with Yoshiki Hayashi as well. During which, the fantastic music of X Japan is constantly rewarding the viewers’ (and listeners’) ears. And you don’t want to miss on that one, now do you?