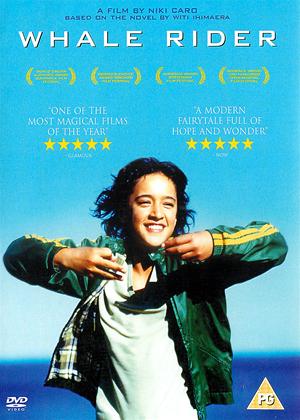 Synopsis:
In a culture steeped in tradition, one young girl challenged the past and found hope for the future. The Maori living in a small village on the coast of New Zealand claim their descent from Paikea, the Whale Rider. In every generation, a male heir has succeeded as chief. That time is now. When twins are born and the boy twin dies, Koro the chief is unwilling to accept his grand-daughter, Pai, as a future leader. As Pai matures, KIoro remains convinced that the tribe's misfortunes began at her birth and calls for his people to bring their sons to him, in the hope that the new leader is among them.
Pai loves Koro more than anyone in the world, but she must stand up to him and a thousand years of tradition to reveal the true way forward.
Actors:
Keisha Castle-Hughes, Rawiri Paratene, Vicky Haughton, Cliff Curtis, Grant Roa, Mana Taumaunu, Rachel House, Taungaroa Emile, Tammy Davis, Mabel Wharekawa, Rawinia Clarke, Tahei Simpson, Roi Taimana, Elizabeth Skeen, Tyronne White, Taupua Whakataka-Brightwell, Tenia McClutchie-Mita, Peter Patuwai, Rutene Spooner, Riccardo Davis
Directors:
Niki Caro
Writers:
Niki Caro, Witi Ihimaera
Studio:
Warner
Genres:
Children & Family, Drama
Countries:
New Zealand
Awards:

2 previous reviewers saw this as a coming of age. I saw it as the rise of feminism against a background of entrenched chauvinism. The grandfather has blighted his entire family with his great desire to see a hero rise from one of the male members. He never considers the possibility of a heroine. In this regard the ending is fairly clear from a few minutes in. What carries the film is some exquisite dynamic within the rest of the family and some amazing New Zealand scenery.

Are there any other mvoies like this? - Whale Rider review by CP Customer

if so, I would like to see some more!

The only 5 star movie so far for me.

It's a coming of age drama with a great performance from the young female lead.

A coming of age film with a difference - a tremendous difference, since this is set in a small Maori costal settlement in present day New Zealand, and not (as almost all others are) in smalltown USA.

Beautifully photographed, it tells the tale of the chief Koro who has no first-born grandson to lead the tribe. Sadly, his grandson died at birth - but his twin sister Paikea survived. Koro has no time for girls - but Paikea is strong willed and the stuff of which leaders are made...

Young Keisha Castle-Hughes plays the role of Paikea to perfection and was Oscar nominated. Only 11 years old when the film was made, her performance is quite astonishing.

The film won the 2003 BAFTA Children's Best Feature Film Award - but it's far more than a children's film.

I found the exploration of Maori culture fascinating and thoroughly enjoyed watching this. It is beautifully shot and the young girl who plays Pai is brilliant.