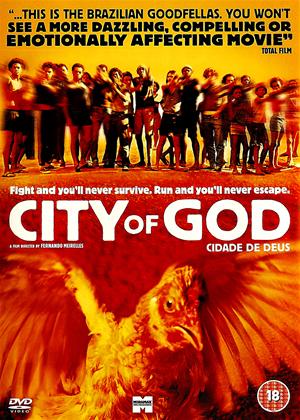 Excellent and engaging - City of God review by CP Customer

Its about the cycle of violence among the poor, young criminals in the slums of Rio De Janeiro. It's entire narrative is saturated with the desperation and violence of Brazil's disenfranchised underclass.But with its quintessential new-Latin-cinema energy, dynamic shooting style and complex structure of interconnected stories, it's also comparable to the Mexican Amores Perros. It is a fascinating, powerful film, full up with angry power about the disgraceful state of Brazil urban poverty, and how it simply creates a culture of desperate greed and cyclical violence.

An epic and a masterpiece by any standard.

This is an autobiography / documentary from the point of view of a boy growing up in violent surroundings. The degree of violence and the realism of many of the killings are chilling. I have never seen a more extremely violent film in the sense of feeling shocked and saddened. I really hope that Rio can pull itself out of this very bad place. It is good, but I cannot bring myself to giving such an extreme film a 5 star.

I have seen this film more than once, and endorse the review titled "Extremely Violent". However I have rated at 5 stars, because as a true story, it is a well made film. If you do decide to rent, you should be shocked, and perhaps saddened, by events. The pace is fast, even frantic. This is not Pulp Fiction or a violent Hollywood thriller. It is what world cinema should be, but it deserves an 18 rating.

Angry Expose of Poverty and Crime. - City of God review by Steve Mason

A classic that changed the way films look. A hyper-kinetic, friction free ride through three decades of gang conflict in a Rio slum. If only those who it influenced could make a film half as authentic, creative and intelligent as this. Its plot actually evokes Manhattan Melodrama (1934) which feels right; this is a classic crime film, for the ages.