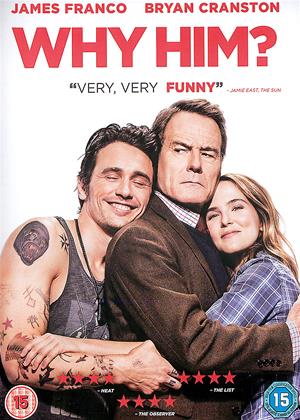 Surprisingly funny - Why Him? review by AT

I was surprised by how much I liked this.

I know Bryan Cranston can be funny, but I find James Franco hit and miss. While this is a comedy with some crude comedy, it also has a lot of heart.

The basic premises is Guess Whose Coming To Dinner crossed with a stoner comedy. Not all the jokes land, and not all were to my taste, but the performances of the two leads won me over,

Surprisingly Watchable! - Why Him? review by EJ

I concur completely with the review left by AT. I let out a small groan when I saw this dvd in my dispatched list, as I thought it would be too crude and wondered why I had picked it, but it turned out to be quite watchable. If only there was an antidote you could take at the start to stop your senses being attacked by all the bad language, as like all movies today, this has plenty!

Good comedy acting from Bryan Cranston and the actress playing his wife (sorry if she happens to read this, as I can't remember her name. Not likely though!) The part when she's high and wants some bedtime fun is hilarious! Worth putting up with the bad language just for that scene.

Why Him? review by Mark McPherson - Cinema Paradiso

Why Him is a Christmas comedy staged as familiar and tedious as a fruitcake for the holidays. It’s that old bit of the uptight dad being introduced to his daughter’s outlandish and annoying boyfriend. They feud and squabble as predictably as the likes of such films as Son-In-Law and Guess Who. It’s a plugin movie where all the parts fit neatly and rarely surprise. On that level, I can’t fault the film for being so much what it is but who is behind it.

Thankfully, some decent players are involved. In the corner of the grumpy and overreactive dad is Bryan Cranston, bringing back some of those mad dad acting chops from his time on Malcolm in the Middle. In the corner of the annoying boyfriend is James Franco, fitting into the role like a glove with his toothy grin and aggravating personality. The two challengers come out and do battle over bowling and drones, with Cranston shaking his head at the idea of Franco deciding to propose to his daughter come Christmas time. And so they clash as science and nature have deemed these two species of the raunchy comedy.

Sometimes, though not as often, the film manages to find some funny stuff. A highlight features Franco delivering a greeting to Cranston’s family by showcasing that he tattooed their Christmas card on his back. A decent bit but it is soon ruined when Franco starts talking to his girlfriend’s younger brother about his vocabulary of cuss words, loudly and in front of the parents. Much like how the film settles into the familiar grooves, I too have a common gripe when comedies resort to the lowest form of using cuss words by making entire conversations about them for the mere purpose of squirms and giggles. I’m surprised there wasn’t a whole act devoted to talking about poop or penises. Maybe the film has a modicum of dignity in this regard.

It becomes pretty apparent as the film goes on that most of the brilliant humor comes from the assembly of gags than the characters themselves. One of the most weirdly amusing scenes features Franco breaking into parkour with a partner amid his backyard of chickens. It’s a funny scene but consider how it seems that there’s a stunt parkour team for some shots. It’s less funny for Franco and more for the direction. For that, I give credit to director John Hamburg for his devotion to comedic moment that has some professionalism, even if they don’t have much personality.

Not as forgivable is the needless busy work of roping in a subplot of a business idea involving toilets. Again, you know your comedy is struggling when toilets play a role. Look, I’m not above humor of cuss words and toilets but both can be handled with cleverness. All we get here is the punch of the words, where the mere mention of the F-word and talk of toilet seems to be enough for funny.

I can’t deny that I did smile and laugh a few times at Why Him but they came few and far between for the film to be truly enjoyable. It becomes a chore in trying to find something so hard to love this type of film, finding myself reduced to sorting through scraps for something entertaining. And it’s a very sad sight when I thought I struck a dirty piece of broken silver with chicken parkour, being thankful the film wasn’t a total trainwreck.