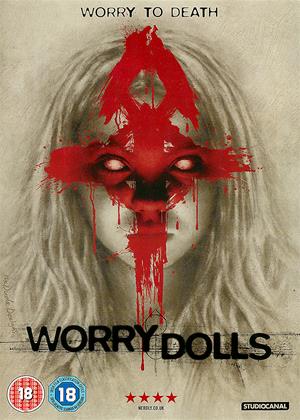 Opening with a promisingly bloody scenario of serial killer Henry murmuring his unstable anxieties into his slight collection of ‘worry dolls’, this film soon evaporates into comparative blandness. That’s the problem with strong beginnings – the rest has then got to match up.

Detective Matt who finally rids the world of Henry for some reason takes the ‘worry dolls’ with him in the back of his car. Why do something so unprofessional? So his young daughter Chloe can then inadvertently get hold of them, of course.

‘OMG, they’re so coowaal’, say the brightly smiling young things browsing ‘Chloe’s Collection’ where she exhibits these and other home-made charms. Sadly, the spirit of Henry, instilled into these novelty items, causes whomever owns them to lose their minds and kill their loved ones.

Chloe, who is afraid of dogs, stabs to death her family’s Doberman (why does the family keep such a pet if the daughter is afraid of them?). She then, Exorcist-like, descends into a blank-eyed trance. Hunky Detective Matt seeks the help of occultist Della who says that as the pure innocent, Chloe needs to be relieved of the dolls – even though they are no longer in her possession. Della is played by Tina Lifford, who invests the part with such weird intensity, she may well be the most interesting character in the film. A shame that her inclusion is such a brief one.

The rest of the cast, sad to say, including Christopher Wiehl as Matt (who co-wrote this) are not very interesting at all. It’s impossible to sympathise with the Detective, whose daughter is, after all, possessed, because there is scant personality there. Likewise other characters, including those who pick up the various dolls and are therefore doomed fail to ignite much feelings of loss. Also, the suburban blandness of most of the locations stifles any atmosphere. A competent thriller with a few gallons of blood thrown in for good measure.