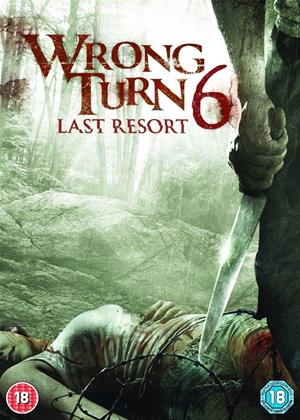 Unavailable
Lovecraft: Fear of the Unknown

Not released
The Eagle Path

One of the first things to strike me about this latest (possibly last?) ‘Wrong Turn’ sequel, apart from the astonishing 11 years that have passed since the original, is that the sex quota has been pushed to the fore. Whereas the original had suggestions of love-making as a pre-cursor for the characters’ inevitable destruction, now the flawless (and charmless) young cast only climb off each other long enough to exchange worried pouts at the sound of distant hillbilly giggling before a great deal of blood accompanies delightfully grisly absurdities. What has made the fairly modest original endure for so long?

A young couple are dispatched pre-credits, but don’t worry: equally characterless cyphers are right behind them. This bunch are making their way to Hobb Springs Resort - a huge mansion inherited by Danny (Anthony Ilott), the one member of the hapless crew to possess any modicum of personality - where immediately the brother and sister caretakers (Chris Jarvis and an impressive Sadie Katz) are involved in minor jealousies concerning flirting with members of the decorative clique. But this is just power for the course; it is window dressing that wastes time before The Inbreeds attack. I’m not sure it is possible to make these people any less appealing – the males are the kind of hugely arrogant, meaningless beefcakes it is best to avoid in real life, and their girls are achingly sensible and concerned and impossible to tell apart, but at least have the advantage of feeling horny most of the time.

The acting is strictly of the over-intense daytime soap variety. The caretakers Jackson and Sally are in league (indeed vaguely related) with the cannibals, the deformity the cannibals have is the ‘price of purity’ – it is when Danny is told he is part of their bloodline that things become interesting. As his friends are tortured in a brutal initiation process, it is quite satisfying that Danny appears to turn away from his former drab coterie. However filthy his ‘new’ family is, they are massively less irritating.