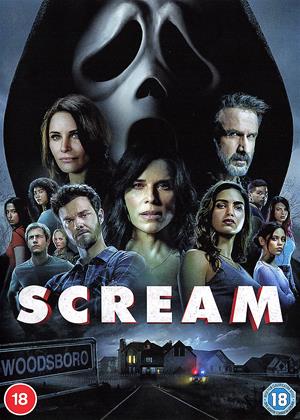 Sign up
The Conjuring: The Devil Made Me Do It

Here comes Scream 5! But, no, this film is just called Scream. Doesn’t that seem annoying? Don’t you want to point that out? Well, this sequel is knowing enough to call out that aspect. In fact, I would expect no less from the Scream franchise that has always prided itself as a meta-commentary on slasher franchises. So having Scream call out horror movie trends is par for the course. If you’re expecting anything more, however, you may be let down with how little tension there is in a horror film that constantly wants to talk about how the sausage is made.

In the tradition of other Scream movies, this is more of a parody than a satire. It wants to call out horror movies for their annoying traits and tropes but still wants to use them in a loving manner. The original film kinda worked on this angle for posing characters who know they’re in a horror movie but still can’t escape the trappings when the killer is right behind them. But the rust is really starting to show for a franchise that repeats itself.

Consider how the film opens. We’re back in the small town of Woodsboro. There’s a teenage girl home alone and answers the phone to a sinister voice. The killer talks about horror movies, plays some trivia, and then attacks. You know the drill. The only difference is that the topic of horror movies has shifted to comment on the more high-minded horror of The Babadook and It Follows. The killer says all that stuff is too artsy and would rather talk about older slasher movies.

On this angle, the film is kinda interesting for the killer being bound by toxic fandom. Without giving too much away, the Ghostface killers of this movie are acting out of anger for horror movie franchises losing their way. We get glimpses of the latest movie for Stab, the in-universe stand-in for Scream itself. Stab 8, from the few clips we see, has gone too far with the Ghostface killer, giving him chainsaws and golden masks. The new killers want to create another real-life slashing to make a better film by bringing things back to basics.

This may sound like Scream is trying to deconstruct itself but don’t get too excited. It’s still paying heed to all the aspects it mocks, including the dissection of sequels, remakes, reboots, and angered fans for film franchises not being what they want. And it will still do all of the annoying elements. We get a lot of returning actors like Courteney Cox, David Arquette, and Neve Campbell. All of them get a big reveal where they turn to the camera and the music grows quietly triumphant, hoping you’ll cheer to see these familiar characters again.

In terms of new characters, we have the standard archetypes once more. Melissa Barrera is essentially the new Sydney, coming into the picture with a dark past that plays into the series of murders. We get a jock, a pop, and a goth as possible suspects, along with the obligatory horror movie nerd to tell all the rules that will do little to help them survive. To their credit, the characters are decent at following the horror movie rules but they’re faithful to an annoying degree.

The murder mystery lacks tension when the reveal becomes more about how twisty it will appear than the building nature of their dynamics. It’s a surprise, sure, but more for the reveal than the climax. All we’re left with after that is some decent kills of shootings and stabbings that do have their small moments of creativity. I really dug one particular Ghostface murder when he stabs somebody slowly through the cheek. There’s also a lot of brutal throat-slitting and repeated slashes that are rather vicious.

Scream has so little faith in becoming more of a deconstruction that it stays within its safe zone of homage and parody. This could have been a golden opportunity for Scream to rise from the ranks and be more than just an updated commentary on horror trends. Sadly, it spends far too much time pandering to mocking horror tropes and then performing them anyway, putting the kid gloves on the topic and easy roles for our returning ensemble.