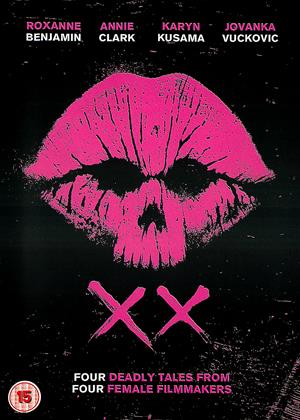 4 very disappointing stories. all begin with promise, but sadly fizzle out before they reach the end.Could have been good but for some reason the Directors decided to not Bother adding any interest or twist to their segments ..Best part of this movie is the short Animated sections between the stories.

I’m always a sucker for anthologies, but there’s been a recent boom in horror anthology films that I’m starting to lose my thirst for this format. XX has the best intentions for being based on the gimmick of all its horror shorts be about women in every way, from direction to casting to themes. It has a lot of potential, more so than the broad The ABCs of Death and the restrictive Holidays. It also has the appeal of presenting more women in horror. But what could have been a bold film that stands out from the current crop of horror blends far too well with the bland when it should be blasting through typical tropes.

It pains me to say that the most interesting segments of XX is the stop-motion transition scenes, featuring dolls, toys and bugs that mill about in a short worthy of any animated film festival. The small animation bits present surreal and weird imagery that stuck with me longer than anything else in this anthology. Credit director Sofia Carrillo for her amazing work and give her an animated feature film deal ASAP.

The segments that follow attempt to touch on some aspect of women, but rarely capitalize on them. The stories dance around such subjects that should be anything but ambiguous in a production such as this.

The first short, The Box (written and directed by Jovanka Vuckovic), has a solid concept for a horror mystery. Susan, a mother, is taking her two kids home on the subway when some stranger shows her little boy the inside of a present. When mom asks what the boy saw, he refuses to answer. Over the following days, the boy refuses to eat, letting his body whither away. He will eventually tell his sister and she will stop eating as well. I don’t mind that the secret of the box is kept an enigma, but once the blunt allegory about supporting your family comes into play, it’s the least of the short’s problems. The writing builds up so much and lands with a thud of gore and nihilism.

The Birthday Party (directed by Annie Clark), touches on a mother’s desire for her daughter’s birthday party to be perfect. Most moms can relate to the stresses of staging such event as they agonize over the decorations and food, fearing the social judgment that awaits them from visitors. The surprising death of her husband pushes her over the edge to the point where she wants to hide the body and keep the party on schedule. On the one hand, the film presents a relatable aspect of trying to hold things together when you should really call for help. But at the same time, most of the film centers on the tension of making sure the husband’s corpse doesn’t put a dapper on the day, where most of the thrills come from her little girl and neighbors nearly discovering the body.

Don't Fall (directed by Roxanne Benjamin) is easily the most substandard and forgettable of the lot. It’s a fairly predictable creature feature about four friends who travel out into the middle of nowhere and end up dead. An evil spirit posses that fearful Gretchen, who fears heights, and transforms her into a bloodthirsty beast that finally conquers her fear. Oh, and kills all her friends.

Her Only Living Son (directed by Karyn Kusama) was the last shot at finally delivering on some female-centric theme and it comes very close. Cora, a single mother, tries to deal with her teenage son Andy turning 18. It’s tough enough to raise a teenager that is about to leave the nest, but twice as difficult for Cora considering her son has the powers of Satan. Cora’s desire to keep Andy both alive and behaved become an intense and somber chore, especially when everyone else refuses to help her out of either being manipulated by Andy or terrified of him. Much like Don’t Fall, this segment falls more in love with its body horror effects than it deeper themes. This could have been a great film that accurately portrays a mother’s struggle with letting go of their children, but gets lost in its own special effects and atmosphere to dig into Twilight Zone territory.

The best thing I can say about XX is that it has potential, both for its directors and the sequel. While I didn’t dig on the themes of each short, they are competently made and never present entirely despicable characters I didn’t care about. Such horror anthologies of V/H/S and The ABCs of Death also started out with lackluster first films, only to deliver on something truly amazing with the second entry. So while I didn’t much care for XX as a whole, its presentation still has me eager to see what will come next from these directors and this series.