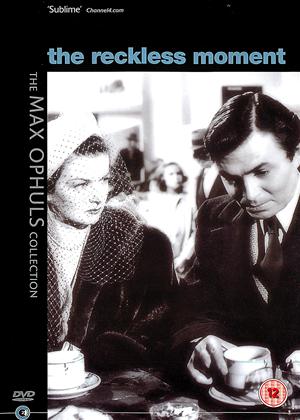 Reviews (2) of The Reckless Moment

Film noir moves to the sunny middle class suburbs of Los Angeles with Joan Bennett as Lucia Harper, a harassed mother of two feisty kids who gets involved in the accidental death of her teenage daughter's much older (and mercenary) suitor and is blackmailed by Martin Donnelly (James Mason) while her husband is away in Europe. He falls in love with her, and so having dropped his personal interest in chiselling $5000 dollars out of Lucia for her daughter's compromising letters, must protect her from his brutal, less principled accomplice.

Which is a crazy, far-fetched story. Ophüls, though a German came from a long background in French melodrama. We are expected to accept the emotional truth of this story even if narrative realism is warped. Making that allowance, this is a thrilling and fascinating film and the relationship between the two leads is very moving, all the more so because code convention means Lucia's feeling for Donnelly must go unsaid.

Burnett Guffey's chiaroscuro photography of the suburban house of shadows is unusually beautiful, so it looks very noir even though but for the death this would be straight melodrama. The dark interiors contrast satisfyingly with the sunlit, prestigious, lakeside locations.

The two stars are heartbreaking. They are both lonely in very different ways. This is one of Mason's very best performances. And (ok, he played a lot of bad guys) most appealing. His unspoken emotional pain is powerfully felt. In the best noir traditional, he suffers for a woman who may well be manipulating him for selfish reasons. Though she escapes entirely free from the law, surely Lucia is not untouched. She must be devastated by his sacrifice? Is Ophüls saying that the poor must suffer and be morally compromised so the rich can live comfortably and righteously? Perhaps, but by the fade-out we are unsure of her emotional cost.

The mom with aplomb - The Reckless Moment review by RhysH

James Mason plays the crook Donnelly, caught between villainy and his growing love for Lucia. He gives a steely performance.

The director Max Ophuls was known for his tracking shots and elaborate camera movements.

A shot that does not call for tracks,

Is agony for poor old Max,

Who, separated from his dolly,

Is wrapped in deepest melancholy

Once, they took away his crane,

The depiction of the black maid reflects life at the time but viewing today it is rather disturbing. Francis E. Williams who plays Sybil went on to have a distinguished role as a political activist, amongst many other things she was chairperson of the National Anti-Imperialist Movement in Solidarity with African Liberation. For this film she is not listed on the credits.