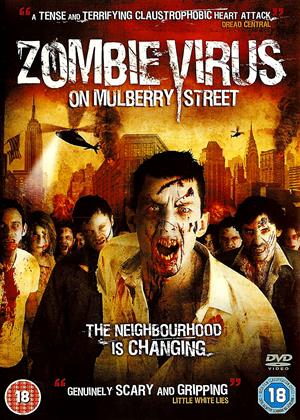 Low budget horror. If you're a fan of the genre, see it - it's rather good - Zombie Virus on Mulberry Street review by RP

This is a rather good, low budget horror film. Rather good because it is claustrophobic, effective, well acted, well photographed, well directed film - and low budget because it was achieved with a reputed figure of only $60k.

The storyline holds no real surprises for a film in this genre - normal New Yorkers get bitten by virus-carrying rats, mutate into flesh-eating rat-like creatures, and attack. There are few survivors. Err, that's it.

So it's a bit of a creature-feature too - and there are no zombies. Quite where this UK DVD title came from I'm not sure - the original title was just 'Mulberry Street'.

The director is Jim Mickle who I first came across in the 2014 film 'Cold in July'. Jim Mickle shares writing credits with the lead actor, Nick Damici. Nothing like keeping it in the family: Jim Mickle's sister Beth is credited as Production Designer and has gone on to work on major films including 2011's successful 'Drive'.

If you're a fan of the genre, see it. I'll give it 4/5 stars - given the budget, it's above average for this kind of film.

It is good going into these films ‘blind’ if at all possible. It’s a risk, of course – sometimes you are met with something distinctly not to your tastes; other times you are met with fascinating gems like this. Mulberry Street in Lower Manhattan is in the grip of developers determined to tear down the ghettos, destroy the urban communities and make everything clean and new. The squalidity is expertly conveyed, with Director Jim Mickle (also well known for 2010’s ‘Stake Land’) teasing out details of rubbish-strewn walkways, cramped and flaking run-down apartment blocks and most pertinent of all, angry mutant rats. So angry at the developments to their homes, in fact, that they begin to infect the locals, creating a race, not of zombies, but of rat-faced killers.

It is an unglamorous setting, but there are moments laced with humour. A scrawled ‘F*** you’ on the bottom of a tenancy agreement pinned to a reception wall; the first infected local is discussed in a bar: “I’d be more concerned for the guy who bit him.” This adds a warmth and humour that really sells the idea of this close community, and therefore we care about what happens to them.

Casey (Kim Blair) is out on the streets when things become nasty. Kay is a pretty blond woman, resourceful and real, as unlike a screaming bimbo as it is likely to be. She’s played by Bo Corre, possibly best-known for her role as Ingrid in short-lived BBC soap ‘Eldorado.’ Strong, shy Clutch (Nick Damici) is the object of her affection, with Coco (Ron Brice) a jealous rival for his attention. A heady, likeable bunch, and all firmly established by the time the mass infection takes effect. Like impossibly fast-moving Nosferatu-types, these creatures’ stuttering attacks are very much in the style of those from ’28 Days Later (2002)’ and every bit as effective.

Gloomy, cruel and hard-hitting: I loved every minute of this.