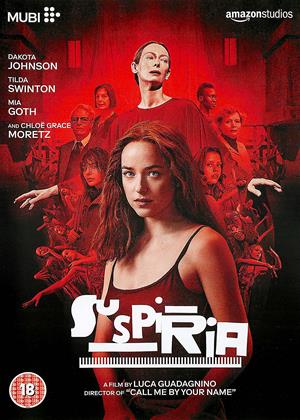 Fair play to this film for its artistic ambition and willingness to set out on its own path, but ultimately this remake just doesn't come close to the power of Argento's original classic. The garish 70's colours and soundtrack of the original have been deliberately inverted, so this time round everything feels bleak, muted and wintery. The first three quarters of the film, with the menace at the heart of the dance school being slowly uncovered are reasonably effective - slow, but with a certain hypnotic charm. Unfortunately the explicit horror climax (complete with rubber monster prosthetics and CGI gore) is a complete mess, and derails much of the tone of what went before. The film is stuffed with allusions to contemporary political events but doesn't seem to quite know what to do with them, whilst the constant intrusion of the story of an old man (played by Tilda Swinton under layers of prosthetics, for some unknown reason) and his long-lost wartime love keeps derailing the focus from the main heroine. Ultimately, this feels both overstuffed and unfocused - some rigorous editing and hacking down the 2.5 hour running time might have resulted in a tighter and more coherent film. Sometimes less really is more.

Some impressive set-pieces, but ... (spoilers) - Suspiria review by NP

Strange isn’t it, that with all the advantages and advancements of make-up special effects, when it comes to disguising a female as a male, the human voice is what breaks the illusion. The male/female character in this updated, reimagined version of ‘Suspiria’ is no more convincing than dear old Elspeth Dudgeon as Sir Roderick Femm in ‘The Old Dark House’ nearly ninety years earlier.

It reminded me in some of its many set-pieces, of the Japanese horrors that proved popular in the early 2000s, especially ‘Audition’ (unsurprising, really, given both films’ focus on dance classes). Some of the Mephistophelian set-pieces full of writhing bodies in the finale are akin to many scenes depicting hell in silent Hollywood films. These images, together with the rich and evocative cinematography of Sayombhu Mukdeeprom and directorship of Luca Guadagnino create some memorable scenes.

However, the moments in between are sadly dull – and there are many of them: there is absolutely no reason why this film has to be 2 hours and 32 minutes long. There is no reason why this story needs so much time to be told. And that proves to be ‘Suspiria’s’ undoing. It boasts a truly wonderful cast, looks stunning and has some eventful moments, but contains so much that is a chore to sit through, and scenes that contain little to justify themselves. I’m not even sure why such vast swathes of the narrative have to be spoken in (often un-subtitled) German, other than to authenticate the setting, albeit inconsistently.

I like slow burning films. I like films that look as impressive and European as this. I like stories that give the impression that they are written by people far cleverer than me. But this is far too much of all those ingredients without any great pay-off. It is a film that loves itself far more than the audience is given reason to. Watching it, I almost felt like a gooseberry at a mutual admiration party. This all sounds harsher than I want it to, but I don’t feel that this new interpretation of ‘Suspiria’, which has received widespread acclaim and therefore deserves to be palatable to a large general audience, has to be such a personal, un-inclusive one. My score is 5 out of 10.

I never enjoyed the original ,It always LOOKED better than it actually was.Style over Content , and the Same goes for this version.

Very Flimsy Story Dragged out Far Too Long and Forced into the Shape of an Arty Film about Dancers when it really is just a very basic Horror about Witches with very little actual magic involved..

Couldn't wait for the end to come soon enough just seemed to Go On and On and On.....and really Do Nothing Very Interesting .

And I have Absolutely NO Idea WHY they bothered making Tilda Swinson Look like an Old Man , I thought it might be part of the story that she was the same person in some Big Reveal ,But it wasn't ...she just clearly wanted to Stretch her Range as an actress and waste an absolute fortune on Makeup...playing 2 Characters.

I enjoyed but didn't love this film, would I watch it again? Probably not! Although, I did enjoy the lead character's portrayal.

As Good As Argento?... NEIN! - Suspiria review by BG

Unlike Gus Van Sant's PSYCHO, SUSPIRIA isn't so much an exact remake but a reimagining. It sticks to the premise of Suzy Banyon going to the German ballet school and discovering witches, but dispenses with Dario Argento's style and pounding score of the original. Politics creep in, fast editing in dream sequences, a dancer gets tied up in knots, and a Grand Guignol finale of blood and guts. The real horror is the film's length. Jessica Harper returns for a short scene, and while a few sequences begin to look promising, I found myself getting bored. That never happened with the 1977 version.

Heard good things about this film, none of which I agree with. Bored senseless is an understatement. Would have preferred to watch paint dry (literally).

Heard good things about this film, none of which I agree with. Bored senseless is an understatement. Would have preferred to watch paint dry (literally).

What a marvelous age to live in where horror classics can have a new life with a throwback feel, true to its source. Not long after the faithful sequel of David Gordon Green’s Halloween, along comes Luca Guadagnino’s Suspiria remains just as faithful in its own artistic, twisted, and confounding means of horror akin to Dario Argento’s original film. A lesser film would compromise and pull back to make the film faster, simpler, and dial back the gore. If anything, Guadagnino only ramps up the film’s awkwardness that dares to be nothing short of an unsettling and grotesque experience, so beautifully fulfilling for it bloody avant-garde nature.

The story takes place in 1977 Berlin, where a dance academy for girls acts secretly as a coven of witches. From the outside and from their dance floors, they appear to be just another strict dance school, led by the focused and shrill Madame Blanc (Tilda Swinton). But beneath their halls, hidden behind mirrored rooms and dark dungeons, is a sinister motive the remains ever secluded and shrouded in darkness and terror. Few girls realize what they’ve gotten themselves into until it’s too late. One girl manages to escape and reveal her findings to Dr. Jozef Klemperer (played by Tilda Swinton in heaps of old-man makeup), a doctor who takes a great interest in the girl’s detailed diary of the witches and their order. Another won’t be so lucky to escape, becoming trapped inside the academy and having her body violently contorted into a mess of broken bones and twisted muscles.

The latest to join the academy is Susie Bannion (Dakota Johnson), a red-headed American that strives to be the best and rejects her Mennonite family from Ohio. Blanc looks upon her with great promise, hoping she’ll make the perfect witch with her dedication to dance, eager to improve her form and jumps. And with her violent dance comes a weaving of spells, seemingly unknown by Susie of what she is doing. She seems so focused on the dance she has no idea that the energy coursing through her body is fulfilling a dark prophecy and keeping the halls quiet from those seeking to escape and expose. If the dances don’t kill you, the vicious spells and basement of horrors will.

Guadagnino’s Suspiria is the ultimate fever dream of a nightmare. The editing is mostly chaotic, creating a sense of panic even in scenes where there doesn’t seem to be much of it. There’s a swirling of plotlines surrounding the witch academy, including the dark backstory of Susie’s family, the RAF terrorist situations pulsating out literally out the school windows, and Klemperer’s tragic past that has driven him to save young girls from terrible fates. Dialogue dips between subtle remarks of the dance to crudely bold statements about having sex with animals. And the violence goes the extra mile of gore, resulting in one of the trippiest, bloodiest, most vomit-inducing climaxes of any film you’ll see in 2018, guaranteed.

While Suspiria is the type of horror I dig immensely, for how rarely something so psychological and putrid as this comes along, I feel the need to tack on a footnote that is by no means everyone’s cup of tea, especially if you don’t like your tea with blood, guts and decaying bodies. It’s very slow-moving, stunningly silent in its staging, and overblown with the red when the witch ritual is abounding. But if all that sounds like tasty ingredients for a good horror, Suspiria is a real treat with fantastic performances, beautiful staging, and an uneasy vibe throughout, perfect the type of horror that digs deep and pierces the soul.