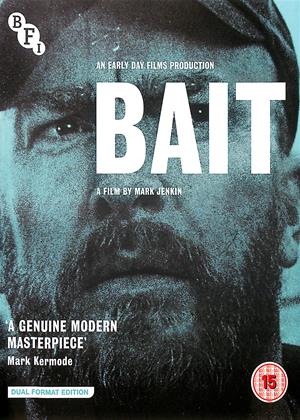 This highly original film from independent writer-director Mark Jenkin is a powerful and at times surreal study of fear and loathing in a Cornish fishing village, the dominant mood being, aka Bad Day at Black Rock, suspicion, outrage and doom. Shot in Cornwall, its microbudget production was partly crewed by staff and students from the film school at Falmouth University, where Jenkin is an associate lecturer.

Bait is grounded in simple, archetypal themes of tradition versus modernity, poor natives against rich invaders. Based on the various tensions between locals and tourists in a once-thriving fishing village, it’s an evocative portrait of culture clashes in an area where traditional trades and lifestyles are under threat. The surface plot has the stark feel of classic neorealism, being shot with a vintage Bolex cine-camera on black-and-white 16mm film, the director hand-processing his footage to give it a scratchy, antique feel, whilst all dialogue and sound effects were overdubbed afterwards.

Local Cornish comedian Edward Rowe is very watchable as the film's brooding anti-hero Martin Ward, a fisherman who has fallen on hard times, and who largely blames the big-city tourists who have colonised his once-thriving coastal village with vacation homes that remain empty most of the year. This conflict is personal for Martin, having been forced to sell the harbourside cottage where he was raised to a wealthy London couple, Sandra and Tom Leigh (excellently played by Mary Woodvine and Simon Shepherd), who have converted it into what they consider to be a charming holiday retreat but, having gutted the place and redecorated it in a twee ‘fisherfolk’ style with nets and maritime memorabilia on the walls, have of course effectively ripped out its soul in the process - as Martin growls: “Ropes and chains like a sex dungeon.”

As he scrapes a meagre living from the seafood that he nets along the rocky coastline at dawn every day, Martin dreams of buying his own boat and going back to full-time fishing. But suppressed anger is slowly eating him alive, and a minor dispute with the Leighs over parking his battered truck outside their cottage soon escalates into a full-scale class war, and the Pinteresque pressure-cooker mix of suspicion and resentment eventually boils over into confrontation, retribution and lethal violence.

Jenkin is perhaps guilty of exaggerating the locals’ resistance to change for contrived effect, but most of the film is sophisticated and intelligent, depicting a symbolic battle that resonates in a post-austerity Britain where the gulf between rich and poor only seems to get worse. And the Cornish landscape is deliberately and successfully desentimentalised, the director effectively turning it into an anti-picture postcard – I loved the raw, slightly depressed feel of the landscape, far more in keeping with mining traditions & fishing villages in Cornwall than current Rock / Padstow & Poldark associations. Yet at the same time everything – a pint of beer, lapping waves, brooding faces – is captured with an infectious love of tactile detail, and it is this that perhaps elevates the film into the quiet classic for which it should be recognised.

13 out of 16 members found this review helpful.

Is the scratchy overlay necessary? - Bait review by TE

Good reviews on here by PD and jb, so I won't go into the narrative or characterisation.

I think it's worth asking a question about the contrived b/w, with the deliberately 'distressed' flickering and scratching. Does it add to the film's impact, or is it something of a gimmick?

I incline towards the latter.

It's a good enough story and theme without the need for such a retro presentation. A b/w film without the effects would have been even more interesting.

One of the technical strengths is the use of close-up, both of faces and of the details of work on fishing gear.

‘They’ve got a porthole!’

Stephen and Martin Ward, two siblings of Cornish fisherman stock have sold their coastal village property to middle-class city-dwellers the Leighs. But younger brother Martin Ward cannot abide these prosecco-swilling, manchego-munching intruders, the changes they represent, and the way they have turned the house into a twee parody of Cornish life.

Shot in black-and-white on clockwork cameras, with sound and dialogue dubbed in post-production, and editing from the Nic Roeg ‘Er, What Year Is It Now?’ school, Marc Jenkin's 'Bait' is singular and compelling, full of technical bravura, only let down by the caricatured nature of its characters. The film is an eerie hybrid of Humphrey Jennings-style documentary and jolting affect, conveying a picture of a traditional world that no longer makes sense to its inhabitants. Times are changing: Stephen Ward now uses the family fishing boat to take lairy tourists on thirty-minute booze cruises. Cultures are clashing, and not only over interior design: the romance that the Leighs’ diffident daughter Katie is having with Stephen Ward’s son Neil disgusts Katie’s brother Hugo. Meanwhile Martin, still clinging to the buoy of the past, nets pathetically small hauls from the local beach.

Violence fills the air like the smell of rotting mackerel. The issues raised are current and vital. But the characterisation can be blunt and lazy. The Wards, grizzled, gruff, monosyllabic, are more than a tad sitcom-ish. The Leighs, with their Apple macs, 4x4, lycra, and cave-aged cheeses are too obviously set up as figures of ridicule. A more subtle film might have made them an implicit presence and simply concentrated on the locals and the struggle to deal with economic forces that bring both good and ill (witness the continuing battle in St Ives to find a solution to the issue of second homes). It’s not the era-defining masterpiece that some reviewers would have you believe, but Bait still hooks you.

This is very stylised and looks like something a media student would have made. I couldn't get past the first ten minutes. It was quite frankly unwatchable.

This was a very strange film, shot in black & white, no real story & the quality of the filming was not good. Don’t waste time watching it! Very disappointing.

Won't be for everyone - but if you can get past the first 15 mins coping with the odd filming style and potential pomposity - you are rewarded with a hugely impressive morality tale, filled with pathos, dry humour against the canvas of a Cornish coastal town adapting to 21st century life.

I'm not a full-on Kermode movie buff - but glad I listened to his recommendations and got to see Bait.

If you are a normal person who watches normal films, avoid. I lasted 20 mins, but it tries (and succeeds) to be one of those pointless, poorly shot and acted films of the 60s, before film making was regarded as a skill. Lingering shots of inane objects, close-ups of faces who then mumble solitary dialogue, by actors who clearly cannot act, with no real story to be told. If you think that salt-and-shake crisps are still the pinnacle of culinary technology, then go ahead. But film making has moved on since.

A bit too odd for me. Very much a film noir: long drawnout moody silences with people smoking. Cinematography makes use of the stunning cornish landscape. Fair commentry on the alienation of traditional culture in a rapidly evolving money driven world. Could have been more dramatic..... I felt the more could have happened to the antagonists like being clubbed to death with a lead filled diving boot , oh well thats an hour and half I'll never get back.

The film is made in black and white which by itself can add to a film if the story grabs you. However this film is not only in black and white its had a fake grain, scratches and flickering and bleaching added to make it look old and filmed on an old 8mm hand camera. I found it so distracting that after 30 mins of trying to figure out who the players were I gave up and switched to another film.

For me didn’t enjoy this. Lots of lingering shots, scratchy black and white footage for style but story too slow and not gripping. I thought acting was ok but otherwise one to miss

Dvd froze whilst being played - Bait review by ec

Very much an arty type of film, presumably made on a low budget. Story is ok. Nothing special. Some convincing acting by the cast members although it does have that feeling of being made for a film project.