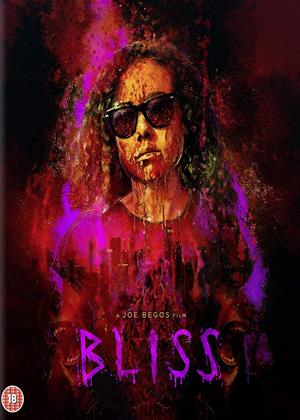 Dezzy (Dora Madison) is a struggling artist. The muse seems to have deserted her. She spends her time high as a kite, having sex, listening to chunky grunge music and swearing. A lot. To have a good time, or to cope with a bad time, she meets up with others just like herself. Together, they get as high as a kite, have sex and listen to chunky grunge music. Oh, and they swear a lot. So much so that, at the beginning of the film, their stream of endless profanities and imaginatively arranged expletives are riotously funny – until you get used to it and it just becomes irritating. In between all these pastimes, they talk about themselves endlessly. Who would have thought being so ‘bad’ could be so boring?

That’s the characters, though, not this film. ‘Bliss’ moves along at a brisk pace. ‘Norm’ (George Wendt) turns up as ‘Pop’ for the briefest time. Even he is surrounded by thick cigarette smoke and a whirl of bad language. Director Joe Begos clearly wants us to become as immersed in this grindhouse lifestyle as possible. There are eccentric camera angles and fast edits to create for us a disorientating world. There’s even a warning for epileptics at the beginning.

I enjoyed the film. It’s a slow build-up. Yes, we understand – these characters are hardcore! But it is a convincing environment and the horror, when it comes, alongside some excellent gore effects, is effective and above all – does something different.

It isn’t possible to sympathise with someone who takes so many narcotics just so she can function enough to take *more* narcotics – and then complains, in the strongest possible terms of course, that she is not well. I get the impression, though, we’re not being asked to sympathise with her. Whether we care about her is up to us – she is presented as what she is: take it or leave it. In real life, I would definitely leave it, but in this film, it is interesting to see where her increasingly deadly trips – and her equally immersive art - are taking her.

Although I thought Bliss was a good film - and occasionally a mesmerising one - I've given it a 2 star rating. The reason for this is that big chunks of the film felt like pure self-indulgence to me. Yes, we get it, 'Dez' (played by Dora Madison) is a rebel, she's into her drink and drugs, she doesn't like being accountable for anything.

But the film chooses to make this point repeatedly, with lengthy segments of her trying to seek out drugs via various phone calls, sequences of her driving around repeatedly either ranting and trashing people or frequent scenes of her ranting into a phone. It's a shame, because these scenes are the weakest of the film by a long way, and feel amateurish, with film-student dialogue.

Madison is by far at her best when the script allows her to be immersed in the character's inner life, and her commitment and bravery in these moments is captivating.

The story of the film is also quite bold. Think a vampire movie, but a seriously counter-culture one where all of the usual story tropes have been removed; nobody gets any neat little double-punctures in the neck.

As far as I recall, nobody ever utters the 'V' word, and nobody deigns to explain to Dez what's going on, making her immersion ever more frightening and convincing, as she discovers vampirism by way of some horrifying moments of sickness and panic, sudden disorientating explosions of gore, and fantastic advances in the work she's trying to sell, achieved in a fugue-like state...

Bliss is intriguingly mysterious. How much of a role does her favourite new narcotic have? Was her new condition all due to one single chaotic night in the sack? Nothing is spelled out, and other characters often tend to react fairly believably to Dez's extremes of behaviour (although as someone who doesn't live in LA, I can't say how realistic it is that at one stage she's able to drive around covered in blood and not get pulled over...)

The special effects tend to be good, and usually very bloody and brutal (although the final one, while effective, almost seemed like it came slightly off-centre from where it needed to be)

The film is fascinating, and clever. It just has quite a few slightly 'drama school' rough edges in dialogue and plotting that will make it a bit too imperfect for many viewers (I know from much experience that my other half would have given up on it about half an hour in, and they have pretty mainstream taste). It's a shame, because the premise is clever, and the elements involving the artwork are creepy and fascinating. It's also nice to see a believably 'counter-culture' version of modern vampires hiding in plain sight. If you're into films that require a touch more patience than average, and don't have to be polished to perfection, give it a try - you might enjoy it too.

I did have on other issue, but it's more with the marketing than the movie; on the poster, Dez has darker skin and black hair. As a result, I hired it expecting to see a black actress (or a mixed-race actress), when Madison is actually white with red hair in the film. While it may not seem like a huge issue to some viewers renting the movie, it feels like a bad decision at a time when many of us hope representation in film is finally beginning to be addressed, and it could perhaps do with being examined in any future re-releases if the publicists care about such things.