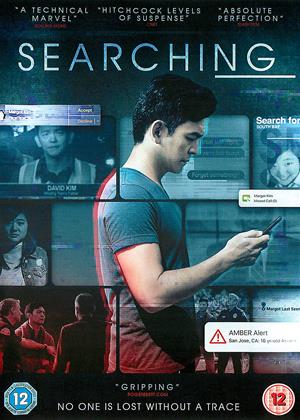 Interesting film about how a father uses his daughters electronic world to try and trace her after she goes missing. Not helped by the police lead officer (very interesting performance from Debra Messing), who has her own private agenda, plus issues with close family members clouding the scene. Not an outstanding film but very watchable for a bad weather day!

A enjoyable thriller. A fathers daughter goes missing, as we see things unfold through his computer, I Phone and the tech world everyone lives in. Different, but enjoyable.

One issue nearly derails the film - Searching review by DB

Very interesting and thoughtful film in the way it is presented. A little like Unfriended from a few years ago but using many more tools to weave through the story. Performances are very good from the key cast members except for Debra Messings character. Completely unbelievable, static and woefully miscast. It does look like she cannot be bothered most of the time, which nearly derails the film completely. Fortunately, the other cast members are watchable and the story holds your attention very well and you genuinely care about what happens. Highly recommended.

Great film, if you’re over 70 and not really into computers then you probably won’t like it, bit if not then you’ll love this film. Don’t miss it!

A very different film, made more enjoyable because of the unusual way you are lead through the story.

So if you fancy something less run-of-the-mill but still with good performances and an engaging story this movie is well worth a go.

Although this film has got fairly glowing reviews from the critics, I found the script rather stagey. By stagey, I mean that the script seemed rather forced. The performances were good, but what they had to deliver was sometimes an exposition. The third act was a bit leaden, even where it was unexpected; and the ending was a little Hollywood, sugar-coated. The technical side of the film was interesting, i.e., that all of the film was presentation from computers or television film. However, as others have commented, the third act, again, veers into 'collecting video from other sources', whereas the first two acts were mostly from the point of view of the computers of the main protagonists. There is tension in the film, but perhaps I simply didn't enjoy the film as much as others seem to have.

It is as it says a 'thriller'. Dad tries to find missing daughter by entering her world via her laptop. This strings the scenes of the movie together and sees the plot progress in episodes. Police are on the job and he forms a relationship of trust with head detective (female). Things develop keeping viewer interested and trying to work out the girl's fate. Enjoyable and seductive; you will be drawn into the story as it unfolds one puzzling bit at a time. Recommended.

and Found on a Computer Screen - Searching review by RC

The most notable thing about the film is the novel way of telling the story through the medium (largely) of computer screen shots. This relies of the father making extensive use of video calls (this was filmed pre-covid and the ubiquitous use of Zoom) - and even the outdoor live action footage is largely shown as captured on phone cameras or by broadcast news reports on a computer screen. It also relies on the daughter having been an extensive user of social media which dad gets access to via her laptop and happening to know a password for one of her email accounts so he can reset passwords on Gmail, Facebook, Instagram, Tumblr etc.

On the whole the technique works well once it has set our expectations, but I'm not sure it wouldn't start to interfere with the story if it was done again. On the other hand it is often said that the existence of mobile phones have made conventional thriller plots far harder to construct and this is one way around that problem. (The TV series Casa del Papel - Money Heist - also managed it quite well, embedding the use and abuse of technology into the core plotlines)

The plot itself is a fairly straightforward thriller/missing person mystery well executed. The twists are subtly telegraphed beforehand so the viewer can have the satisfaction of thinking "I though something like that was happening" after each is revealed.

On the whole an enjoyable movie. We watched it on a 5ft home projection screen - it might be a bit overwhelming on a large cinema screen - and sitting on a sofa where we normally spend far too much time with a laptop so it seemed quite normal.

As an aside it does remind us at times just how toxic the social media world has become - if you give up using it you will find life far more positive and fulfilling.

Searching is not the first film to use the computer desktop environment to weave a technology-bound bottle thriller but it’s certainly one of the best. A lot of films that take advantage of this budgeted format often tend to get lost in the theatrics or try too hard to stir up something fantastical, as seen in the likes of the slasher picture Unfriended and the too-twisty thriller Open Windows. This film is far more grounded and astute that it makes this thriller far more compelling with less questioning of the mechanics.

We’re introduced to the history of a family through various operating systems. Over time, we watch their environments change as much as the Kim family. Daniel Kim (John Cho) raises his daughter Margot with his wife Pamela. Through photos and videos, we see them grow up. Pamela passes away from her long battle with cancer and Margot is soon off to high school. It’s a difficult and different time for Daniel, trying to learn to let go of his daughter who grows more distant from her dad. That is until one night she doesn’t come home. He doesn’t know where she is. She is not responding. Something is wrong.

Daniel tries to find a series of clues as to where his daughter went. Thankfully, even though she wasn’t open with her dad, she had been very open online. Searching through her various online profiles, she slowly peels back a string of friends and actions he never knew about. He thought she was continuing her piano lessons but that was a lie. Her various classmates referred to her as more of an outsider, someone who was very different around her dad. What follows is a twisty plot as the online layers scale back and betrayal is afoot from various angles as the investigation continues.

The film paints an intriguing picture of privacy and how easy it is to turn detective in our online environment. The ease of access allows for Daniel to multitask, getting ready for an online meeting while also learning something devastating about his daughter. He can peer into the background of online chats and pick out clues. He can scan pictures and observe chats and VODs to determine who his daughter was talking with and when. He pokes around various social platforms with the same curiosity of a detective from yesteryear strolling into a scummy back alley to find some info.

Though the thriller takes a twist that is perhaps a tad too odd for the sake of surprise, it never feels like this staging runs itself off a cliff to get goofy with the procedure. Everything within Daniel’s investigation feels real and relatable even if the mysterious plot seems more weak-season CSI. There’s never a moment when the film doesn’t feel engaging and takes the liberties where it needs to in telling a story entirely through media. This is a fairly new subgenre of trying to make modern mysteries more appealing and Searching provides comfort that there will at least be some intelligence behind this format instead of just being online boogeymen stories we’ve received so many times in the past.