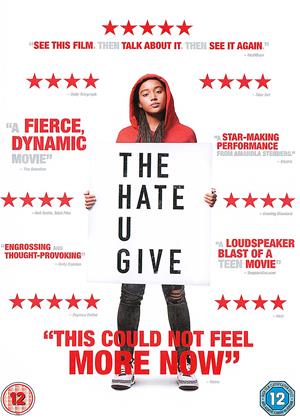 Reviews (2) of The Hate U Give

The never ending problem - The Hate U Give review by Tony

Saw this at an Unlimited screening at my local Cineworld. As it was a mystery screening the place was quite full. When the film started, I like most of the audience didn't have a clue what it was about. There were many walk outs in the early stage as it was very slow and the dialogue was hard to follow and understand. I was close to leaving myself but thought that as I'm here I'll give it a bit longer, and how glad I was I did. The second half really kicks in and is brilliant. The plot is cops persecuting the Afro Americans and shows what it is like today with a brilliant story-line leading it. Brilliant

This is a terrific portrayal of the racial divide in the US. A young black female student called Starr, who goes to a mainly white school is the only witness to the shooting dead of her best male friend by a cop. This act unleashes collective fury in the black neighbourhood. Starr has to testify to a Grand Jury about what she saw. She mentions that her neighbourhood is plagued by a drug gang.

Some of Starr's friends, while purporting to be very liberal, make crass and insensitive remarks to her. Her white boyfriend, Chris, meanwhile genuinely loves Starr. The drug gang decide to punish Starr and her family for snitching. Here the film gets very tense indeed.

I found this film to be very well acted, and a fair and probably accurate portrayal of the racial divide in the US, and its consequences.

The Hate U Give review by Mark McPherson - Cinema Paradiso

It is sad to write that a film such as The Hate U Give comes off as fantastical because there is hope within its narrative of the aggression between black people and cops. But with all the rampant racism and violence present in our current society, the fantastical sure seems warm. Here is a film that wants to hold up its hands and shout enough, where the loudest voice and display of innocence lost temporarily saves the day. It’s the kind of story we hope can be true and should unfold.

The story is seen from the perspective of Starr Carer (Amandla Stenberg). Her family has grown up being aware of the problems of their neighborhood and how to deal with the cops, being taught at a young age how to handle themselves when the police pull them over, speaking from experience. To make sure their kids have a better life, Starr is sent to a more prominent and white school outside the ghetto, Starr relays the words of her parents that the kind of school in her neighborhood is only good for getting pregnant or dying young. Going to such a higher-class school leaves Starr feeling uneasy, trying to conceal her outrage and “blackness” to fit in with the crowd.

Some elements of her neighborhood life remain, as with her childhood friend Khalil (Algee Smith). They hook up at a party and have a nice chat on the way home. He tries to lean in for a kiss but she admits she’s currently in a relationship with a white guy at her school. He says it’s no matter as they have plenty of time to figure themselves out. After all, they’re young. Unfortunately, they’re also black and subject to the police pulling them over. When this happens, Khalil doesn’t take the situation as seriously as Starr and is gunned down in the street. She has witnessed the murder of her best friend due to police brutality.

But the question arises of what will happen if Starr chooses to speak up. She doesn’t know if she wants that pressure, to be labeled as a target of both gangs of her area and the police for calling both of them out, as she has also remained silent on another murder by gangs. She has chosen to remain silent this whole time, to keep her head down when bullets fly and trials are held. But this won’t work. Her rage only builds, to the point where she explodes on her white friends for looking down on the situation of police brutality as an excuse to walk out of school or shame for the officer being prosecuted.

The Hate U Give has a great message but one must prepare to push themselves through the melodrama to truly see its glow. The good news is that the film pushes itself hard to bolster its message about recognizing how our actions have consequences, leading up to the trembling moment when the characters realize the venom we spew carries to the next generation, fueled by everything; the racism, the police brutality, the protests, the gangsters. The more we view the situation as us versus them situation, refusing to see the emotion of others, the more tragic results will follow.

One may scoff that such a climax is far too fantastic to have played out the way it did, for a moment where cops and protesters leave a situation both beside themselves. I’d like to believe we’re that human. Maybe that’s what makes The Hate U Give such a somber idolization; it reflects the real world but also amounts to what we’d ultimately hope we learn from the many acts of racism and police brutality. Great points are made, but they all lead up to an ending that many are still wishing for. Someday, perhaps.