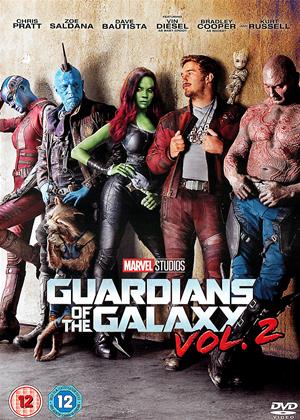 Rent other films like Guardians of the Galaxy: Vol.2

Best judged as a children’s film, with cartoon characters (especially the humans), playschool monsters and unfunny slapstick cgi action. There’s no plot worthy of consideration, including father-son bonding rammed home with Cat Stevens singing ‘Father and Son’ on the soundtrack. The long talkie sequences feature inane dialogue full of lame jokes. It’s even worse than the original film. Have special effects ever been so boring?

Guardians back Story - Guardians of the Galaxy: Vol.2 review by porky

Enjoyable ,fills in the back story of the main characters nicely but I didnt find it as entertaining as the First .

This film follows straight on from the end of the last movie , Groot is still a small sapling as was seen at the very end of the first movie so he doesn't do a great deal in this but looks cute whilst not doing it .

Family and Friendships become better explained and the Guardians Gang grows larger whilst at the same time loosing members along the way. an all familiar 70's Rock soundtrack helps along all the action and the odd Comedy moment as before .

Great Romp - Guardians of the Galaxy: Vol.2 review by JS

Almost slapstick, this is a great piece of fun. The Guardians start to gel and you believe in them as a group. Great jokes and action. You don't have to engage your intellect just sit back and enjoy the fun. Better than other Marvel films where they all take themselves sooo seriously!

Children's film - Guardians of the Galaxy: Vol.2 review by HM

Very silly and then some! Sure it is ridiculous on purpose but clichés; baddies cannot shoot straight etc. For the kids really

Good fun. - Guardians of the Galaxy: Vol.2 review by jm

I really enjoy these tongue in cheek sci fi comedy adventures, but only give it 4 stars as sometimes they take it too far and can end up spoiling the story line.

Ok, for some reason there is a huge audience - millions of people - who think it's hilarious that there's this character - a mini tree with a cute face - who can only say a single word. No matter the circumstance this baby tree creature has even less lines to remember than Kenny Baker's R2 D2. This fantasy story is silly fun I suppose, with a bleak yet preposterous final act, with a twist that was a big yawn. I suppose when you have characters with names like "Star God" what do you expect ..

highly entertaining - Guardians of the Galaxy: Vol.2 review by JD

I dont think there was a huge amount to this film. Its certainly no classic. And such a weird group of characters... but its never serious.

I didnt really care where the plot was going or came from, it was just hugely good fun to watch.

Contrived with clever visuals - Guardians of the Galaxy: Vol.2 review by GJ

Vol 2 is still witty , with clever visuals and high paced . However it concentrates on characters that are not really interesting. Star lord is your basic space dude. The 89s music worked well in the first film and starts of well particularly the opening sequence , but it's over used and begins to drag .

the over emotional ending and I mean emotion with a capital E , seems contrived , considering your supposed to care for a pretty dispicable charscter because the music and continual close ups tell you to.

The visuals are its strong point . You don't question the CGI characters there's the usual trope of family and destiny fulfilling so nothing really new in terms of plot.

a great family full on action fantasy film from start to finish. I. Enjoyed it as much as.the first

James Gunn's sequel is a cathartic experience for anyone with bad parents - Guardians of the Galaxy: Vol.2 review by Christopher Chiu-Tabet

What we have here is perhaps the creepiest, most abusive villain in any Marvel Comics film to date, and arguably the worst father in the Marvel Cinematic Universe (if it’s possible to be worse than Thanos). There's an amazing gag here that is all the more brilliant because it has a dramatic payoff in the climax, rather than being a set-up for another joke. The film is a reminder that our original families don’t often work out, and we form new ones to replace them. We realise someone doesn’t have to related by blood to be your personal David Hassellhoff, and perhaps they’re stronger because you realise they love you even without the biology of unconditional love.

Brilliant better than 1st one - Guardians of the Galaxy: Vol.2 review by LC

The sequel (or second volume) to 2014’s standout superhero outing of Guardians from the Galaxy is more of what we want, but not more of what we need. You’ll get more of Peter Quill (Chris Pratt) cracking 80s references, Gamora (Zoe Saldana) being stoic, Drax (Dave Bautista) being hilariously blunt, Rocket (Bradley Cooper) being devious and Groot (Vin Diesel) uttering his only sentence of dialogue ad nauseum. While it is true that James Gunn’s directing style is a refreshing change of pace from the usual superhero epics and his charming ensemble has enough wit to make even the most formulaic of superhero plots more fun than they should be, it’s a little disappointing to see Guardians slip into a safer realm when it was once such a rebel of the Marvel Cinematic Universe.

Most Marvel ensemble pictures have done a great job at giving every character enough to do and while Gunn’s picture certainly makes enough room for everyone, it comes off very uneven and rushed to make sure everyone gets a piece of the script. There are at least five arcs going at the same time and the most central of all them also seems to be the most undeveloped. Peter finally finds his true father among the stars; a sentient being by the name of Ego, appearing as a bearded and high-spirited Kurt Russell. Or is the Kurt Russell form just what Peter wants to see? Did he see Overboard or Escape from New York before being abducted from Earth? I ask only because Peter seems to have lied about who his father was to his friends on Earth, referencing another celebrity icon of the 1980s. But the more important question is where has dear old dad been all this time and why he left Peter’s mom.

Those questions are sidelined, however, as the movie makes way to give all the other characters something to do, separate from Peter’s “my dad is a god” plot. Gamora finds herself still engaged with bitterness for her sister Nebula, picking up their sibling feud from the previous movie. Her story feels more fleshed out, gritty and personal. But no time for that story! It’s now time to watch Drax form a romantic bond with the cute empath Mantis. Will he finally confess his hidden feelings about losing his wife and daughter? Sort of, but, wait, hold that thought! Let’s watch Rocket and Yondu (Michael Rooker) lay waste to a whole ship of dumb outlaws that want them dead. They make a great team and will perhaps come to terms with their troublesome nature by confessing their pasts. But they’ll have to wrap that story up quickly because Groot, now in his baby form, is doing a silly dance. Look at Baby Groot and how marketable he will be as a toy for the kids!

I think the movie’s resting on its laurels is best personified through Baby Groot. As a baby, Groot can’t do much. Sure, he’s cute in the opening as he dances in the foreground while his comrades fight a monster behind him, but what more can he do? He can’t really fight, spending most of his time tripping people or riding rats. His small height makes him easy enough to throw and toss for his comrades, but more for safety than combat. Groot may not have the deepest background, but he was at least useful and had a personality in the first movie. Here, he seems to be more of a mascot than anything. There’s so little for him to do that the movie has to feature a scene where he is kicked and doused with beer so that you’ll feel sorry for him. And for as much as the whole baby joke angle is forced with Groot, there are at least a dozen missed opportunities here. Couldn’t the group make Groot a baby harness or special seat so he doesn’t bounce around the ship? I kept thinking of how the Guardians would actually handle missions with a baby and cringed.

I’m sure because of the mass appeal of Guardians that you really only care about one question: Is it still fun? And, yes, it’s still just as cute, crass, crude and stylish as it ever was. The soundtrack once more features a collection of funky rock from the late-70s/early-80s, the dialogue is silly, the characters are still likable, the action scenes still awesome and the sci-fi setting has a quality both lived-in and otherworldly. It’s a pleasing sequel on these merits, but for acting as a follow-up to the most risky and divergent of Marvel movies, it’s in danger of stagnating with its overstuffed plot at 2½ hours. Sure, I still had a fun time dancing along to tune of Vol. 2, but with a worrisome thought in the back of my head about the inevitable third film being more of a Greatest Hits than Vol. 3.