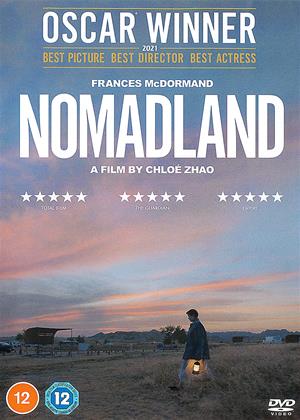 A gentle and compassionate film that has a magical quality to it and seems to question the very nature of the American Dream. Frances McDormand plays Fern, a middle aged widow who has lost everything in the 2008 recession when the company her late husband worked for collapsed effectively closing down the town too. Without complaint she becomes a 'nomad', buying a van and travelling around the country following seasonal work. She finds a sort of peace and tranquil life amongst her fellow nomads who teach her how to live a satisfied and fulfilled life on the road. In a sense there's a post apocalyptic feel to the film and at times I was expecting the gentle nomads to be harangued by Hells Angels or something but this never happens as this is a film about finding a state of peace in life. There are many hardships and heartaches though for these people who bond in a most beautiful way and who have a catchphrase of 'see you down the road' even if this maybe in months or years and in some cases into eternity. America is painted here almost like a wasteland and often a harsh place and although Fern is offered a return to a 'normal' life on two occasions she rejects them in order to maintain the magic she's discovered. McDormand in a quite understated yet powerful performance is in every scene and deserves the accolades she has received, it's arguably her best role. This is a film that looks at America yet doesn't need to thrust the economic disaster of why people have to resort to this lifestyle into the story, it's presented here for all to see. A mesmerising film at times with a beautiful score and images. It's a film worth seeing at the cinema if you can.

All life is here - Nomadland review by AER

Eloquent, poetic and moving, Nomadland isn't a romantic depiction of life on the road, it's tough. However, this film reminds us all that we have to recognise who we are and what we want from life. It's unsentimental yet very persuasive and sad. 10 out of 10.

Frances McDormand is a poor “houseless” woman who lives in a van and travels around the American West. If this was a British film it would be a political diatribe against “the system”. Instead it’s a wonderful paean to life on the road, the joys of solitariness, the spirit of community among like-minded travellers and, not least, the beauty of the Western landscape.

It adopts a documentary-style approach, with some of the travellers she meets being real-life people rather than actors and with scant a plot apart from the changing of the seasons and the triumphs and disappointments of everyday living. But it’s so gentle and beautiful to watch that you soon get drawn into the life and the epic landscapes along with the travellers.

This truly remarkable piece is an understated yet devastating film about the delicacies of that distinction. An adaptation of a non-fiction book by Jessica Bruder, it uses Frances McDormand's Fern as a lens through which to question the very nature of the American Dream. The subculture sensitively depicted here concern many people near retirement age but without the option or inclination to retire, and, instead of struggling to sustain what they once had, have whittled down their needs. They’re refugees of the last recession, of rising housing costs, of a threadbare safety net — though director Chloé Zhao never reduces them to by-products of a callous capitalist system. Through choice or necessity, they’ve traded career grinds and the lure of the property ladder for a precarious but carefully guarded kind of liberation.

But the film goes further than this, having a fable-like quality worthy of John Steinbeck, dealing with the bigger issues of life and death, love and loss. It takes a while for Fern to firm up into a character rather than a narrative vehicle, but when she does, she emerges as a fascinatingly contradictory figure, being someone who’s still in mourning and in whom the desires for connection and freedom are constantly at war. She hasn’t been abandoned, either by strangers or those who know her — throughout the film, people offer to take her in, but that is never what she wants. Through the nomads, who cross paths and help each other but never try to hold on to one another too tightly, Zhao is able to examine the idea of wide-open frontiers without nostalgia or the need to preach: shots of Fern, a tiny, determined dot out there on a stunning panorama, are breathtaking and elegiac, worthy of some of the great directors. She is a woman eking out the life she wants to lead, a woman who has gone searching for her soul in a country for which this is deemed irrelevant, and if you don't cry during the last sequences then there's something truly wrong with you. Compelling viewing.

Loved this film! It was beautifully and sensitively shot, and the performances were magnificent. I really liked how the film invited real-life nomads to participate, this really helped give the film a firm layer of authenticity. Frances McDormand put in a stellar performances, as always - I don't think I've seen her in a bad film! Highly recommended!

A film that richly deserves all the awards and plaudits it has received.

Frances McDormand has always been a fine actor, but her performances have reached a new level of truth and excellence since the superb mini-series 'Olive Kitteridge'. She has become the perfect model for the independent, emotionally intelligent older woman, tough-minded but also capable of warmth and self-doubt.

Here, her character, Fern, explicitly rejects the chance to settle down with a caring and respectful man (very well played by David Strathairn). And at the end we see her embracing the road once again after a visit to her former house.

Some reviewers have seen this as "sad", but Fern is actually making a positive choice. She is most comfortable as a loner, and she also values the transient sense of community with like-minded women and men.

This latter point comes across very strongly in the blu-ray disc extras, where the 'nomadic' life is warmly celebrated as a personal solution to the stresses and pressures of conventional society.

All this is beautifully wrapped in Chloe Zhao's trademark feel for the wide open landscapes of the American West.

I strongly recommend the book that the film is based on: 'Nomadland' by Jessica Bruder.

Frances McDormand plays Fern, a woman who used to living on her own since the death of both her husband and her town. Her life doesn’t seem happy but it doesn’t seem sad either. There’s a certain comfort she finds in living out of her car, traveling America from state to state in search of work. A film such as this could easily have been another commentary on the class struggle by making Fern a figure that is bitter and angry. She instead just feels a certain emptiness, quietly contemplating everything with her life on the road.

Her travels are unique. She hooks up with a group of other nomads who congregate in the desert and she not only trades for goods but learns certain skills, such as how to make a toilet out of a bucket. She also wakes up early one morning to witness an amazing sunrise. Fern says nothing during this scene, simply passing by other nomads and watching the light envelope the land, listening to the sounds of passing cars by the nearby road.

Fern’s life is one where she feels like she is a constant passenger. She bounces from job to job and sometimes runs into familiar faces. It may somebody from the nomadic group or someone she used to know from her days before the road. Her newest acquaintance she meets is Dave (David Strathairn), a fellow nomad who finds himself fancying Fern. Despite Dave’s many attempts to get to better know Fern, she’s not as keen to pursue a new relationship, especially when it is off to a rocky start. But for Fern, it’s more than just a broken heart. She just can’t bring herself to the concept of settling down.

She is given multiple opportunities to do just that and refuses for one reason or another. With her family, it’s easy to understand. She’s looked down upon by others and finds herself unable to stay in a home where people don’t have the highest opinion of her. Despite having borrowed money for car repairs, she doesn’t want to be known as the leech down the hall. However, with David, it’s a bit more complicated. The house of David’s offspring is a place that welcomes her but she just doesn’t feel that this is a place she can fit in. It may just be too perfect or just not her scene. Whatever the reason, she can’t stay long. She can’t stand staying longer in anyplace anymore.

Director Chloé Zhao gives her film this real quality and not just because she found actual American nomads to appear in this film with mostly ad-libbed dialogue. She shoots America in this somber and reflective light that lets the audience take in the experience of Fern in a manner that feels free of judgment. The soundtrack never tries to force an emotion nor do the many cold and light shots. The film is also expertly edited to only spend just enough time in certain places and with certain shots, never letting the camera linger longer than it needs to.

Nomadland may be a bit underwhelming or confounding for some in that it takes this almost ambiguous approach to Fern’s journey through 2012 America. Personally, the film just resonates in a way that invites the viewer in, trying to figure out Fern and just what she feels by the climax where she passes through her abandoned town. She seems like a ghost but not one that is haunted by the past. She may be searching for something but all we know for sure is that she has another destination in mind by the time she gets back to her van.